The 2022 season will be the first season with Jarrod Molnaa leading the Walla Walla Community College Baseball program.

Jarrod returns to Walla Walla and the Walla Walla Community College Baseball program after playing in the program from 2013-2017, under Dave Meliah. In his time on the field for the Warriors, Jarrod collected All-Region honors in each of his two seasons as a starting pitcher. In the 2017 season, Jarrod helped in leading the Warriors to an NWAC tournament birth and a third-place finish, the program’s best since 1990, where he also collected NWAC Tournament Team honors after tossing a complete game and striking out eleven in the opening game of the tournament. From Walla Walla Community College, Jarrod went on to spend a season in Bellevue, Nebraska pitching in the Bellevue University Baseball program, under Duane Monlux. In his lone season pitching for the Bruins, he helped lead the Bruins to a super-regional appearance while collecting All-Conference and Scholar-Athlete honors with an undefeated record while holding a 1.88 ERA and opponents to a .165 batting average against him. In 2018, Jarrod transferred to play his senior season in Billings, Montana in the Montana State University – Billings Baseball program, under Aaron Sutton. In his final collegiate season, Jarrod helped lead the Yellowjacket Baseball program to a GNAC championship, a GNAC Tournament championship, and the program’s first ever NCAA Regional Tournament appearance. Jarrod graduated from Montana State University – Billings and holds a Bachelors of Business Administration with a Minor in Communications.

Coach Jarrod Molnaa comes back to Walla Walla Community College after serving as the assistant baseball coach for the Montana State University – Billings Baseball program for the last two seasons. Prior to his stint in Billings, Montana as a coach, he served as Walla Walla Community College’s Pitching Coach and Recruiting Coordinator. Jarrod coaches in all four seasons of the year as he is also the manager of the Spearfish Sasquatch, a team based out of Spearfish, South Dakota, who are an affiliate of a wood-bat collegiate league, the Independence Baseball League. In his first season recruiting and managing the Sasquatch, the club amassed 46 wins, more than doubling the highest win total in the organization’s history and capturing the club’s first playoff and Championship Series appearances.

Coach Molnaa is close to home as he is originally from Kennewick, WA, where his family still resides. Jarrod graduated from Kennewick High School in 2013. 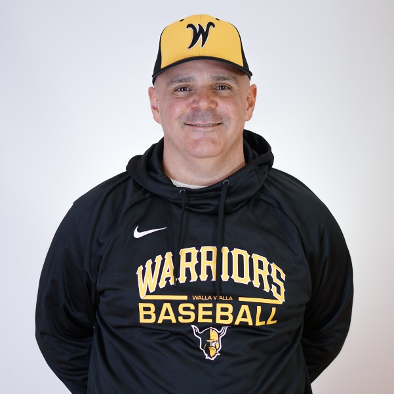 He specializes in teaching fundamental technique and the mental approach to the game. Steve is an Associate Superintendent at the Washington State Penitentiary and holds a Bachelors of Science in Organizational Security and Management from University of Phoenix and a Master’s of Science in Management and Leadership from Western Governor’s University-Washington

Born and raised in a small town in Idaho, Matt played two years in the Walla Walla Community College Baseball program from 05-07’. Matt then went on to play in the South Dakota State University Baseball program to finish out his collegiate baseball career. From there he went to PT school at Idaho State University and now runs a Performance-Based Physical Therapy Practice here in Walla Walla designed to address both athletic injury needs and enhance performance. He is married to his beautiful wife Rachelle. They have one young son, Colton, and a trusty black lab, Grizwald, as his older brother.