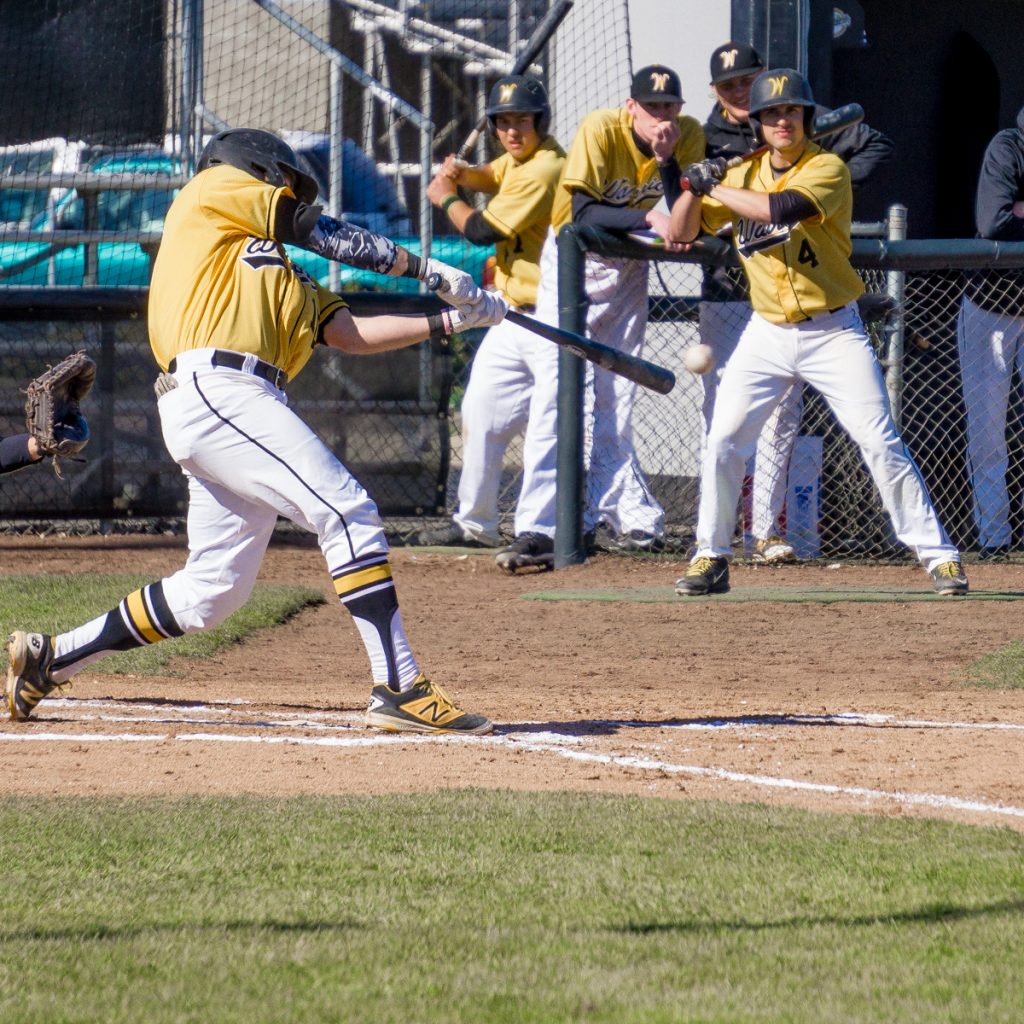 Kobe Morris and Sergio Midili each hit a home run for WWCC, and the Warriors swept an NWAC East Region baseball doubleheader with 7-6 and 13-7 wins over Wenatchee Valley here on Wednesday.

Morris blasted a two-run shot in the opener for 5-3 lead in the fifth inning, but the Warriors would have to rally from behind in the bottom of the ninth with Danny Robinson stealing home to tie things up before a wild pitch scored Zach Berryman to win the game.

WWCC rallied again to take the nightcap, Midili doubling home the tying and go-ahead runs with nobody out in the seventh inning before adding his three-run smash in the eighth as the finishing touch.

The seventh-place Warriors (4-16 overall, 2-4 in the division) ended their six-game losing slide with a sweep of cellar-dwelling Wenatchee.

WWCC will next play at third-place Columbia Basin on Saturday, their doubleheader to start at 1 p.m.

The Warriors look to continue getting production up and down their batting lineup.

Morris finished the Wednesday twin bill with five hits in 10 at-bats, and five runs batted in as well as a stolen base.

Robinson went 4-for-7, including three doubles and two steals in the first game before tripling and drawing three walks in the nightcap.

WWCC cleanup hitter Lane Hailey drove home a pair of runs as he went 3-for-6 with a double and two walks.

Midili did all his damage in the second game, going 2-for-5 with six RBIs.

Berryman won the first game as a pinch runner in the ninth inning, and then tripled and singled with his start in the finale.

WWCC leadoff hitter Carson Green finished 2-for-9 with two walks, driving in runs on three separate occasions of the nightcap with his single, groundout and sacrifice fly.

Blake Loftus stole a base for WWCC in each game, and Christian Berry doubled home a run in the opener.

In the opener, the Warriors had Michael Peterson, Brody Woods and Spencer Schwehr combine to limit Wenatchee to six runs (five earned) on eight hits (including a pair of homers), seven walks and a hit batter as they totaled 13 strikeouts.

Wenatchee wound up leaving 11 runners on base in the first game.

The second game had Brayde Hirai, Wyatt Baldwin and Summit Neil combine for 12 strikeouts as they held Wenatchee to seven runs (five earned) on 10 hits, three walks and a hit batter.

Wenatchee jumped ahead in the opener with a run in the top of the first inning, later added two more in the fourth for a 3-2 lead, and then put WWCC on the verge of its seventh straight loss with a two-run top of the ninth.

The Warriors faced their possible last at-bats trailing, 6-5, but Robinson then doubled with one out.

Coby Roberts walked to put the potential go-ahead run on base, and Robinson stole both third base and home to tie it up.

A couple of Wenatchee errors advance Roberts all the way to third base, where Berryman run for him and finished the game on the wild pitch.

In a back-and-forth second game, Wenatchee score first in the second inning, and later added two more runs in the fifth for a 3-1 lead.

The Warriors came back with three runs in the bottom of the fifth, and each side scored one in the sixth, but Wenatchee plated two more in the top of the seventh for a 6-5 lead.

That was when WWCC put together four-run rallies in both of their last at-bats to complete the sweep.