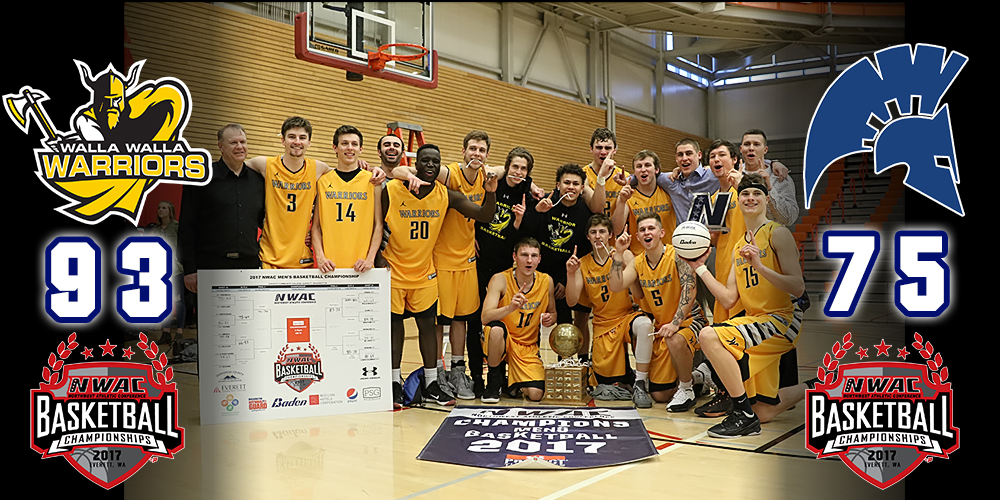 Walla Walla’s last tournament appearance was a loss to Tacoma in 1982 when its current head coach, Jeff Reinland, was actually playing for the Warriors.

After waiting more than three decades, Reinland and the Warriors finally got their win.

Walla Walla knocked down big shots when they counted and played lockdown defense down the stretch to secure a 93-75 win, its first NWAC championship since 1979, on Sunday, March 19.

“Once we got ahead, I think it stunned Tacoma a little bit,” Walla Walla head coach Jeff Reinland said. “I think they got a little bit down.”

Walla Walla kept the momentum on their side with stifling defense and taking advantage of open-shot opportunities to garner a 52-26 lead at the break.

“On the offensive end we just got it going,” Reinland said. “We had them spread out, hit several big 3 balls. Second half I told the guys I didn’t want to talk about out the lead.”

Tacoma pulled within 16 with 11:50 to go but couldn’t sustain momentum as Walla Walla continually fed their shooters, gaining a 26-point lead with 5:45 remaining, enough to hold off the Titans.

“I think when Tacoma got it down to 16, then we got it right back to 23, I think that pretty much cooked it at the six-minute mark,” Reinland said.

Reinland said despite the outcome, Tacoma’s quickness and athleticism initially concerned him.

“I thought Tacoma came ready,” Reinland said. “They were fired up, they were quick. I told my assistant coach in the first half, ‘I think we should switch to zone.’”

Shooting a blistering 51.6 percent from the floor was ultimately the momentum changer for a Warriors team that held Tacoma to only 37.5 percent shooting.

“Besides our big, all four of us starters can shoot lights out,” Radliff said. Once we started hitting in the first half, we got a lot of confidence. Once we get some confidence, we’re a pretty tough team.”