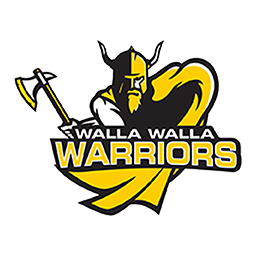 The second Men’s Final Four match of the night featured a pair of #3 seeds out of the West and East in Lower Columbia and Walla Walla.

This was a classic matchup of offense versus defense, with the winner moving on to face Tacoma in the Championship game.

The game started out with a flurry of three’s from the Warriors, knocking down 7 in the first 7 minutes of the game with four of the five starters hitting at least one.

Caulin Bakalarski finished the first half going 4/9 from beyond the arc and Dalton Thompson went 3/5.  The Warriors ended shooting a respectable but not overwhelming 36% 3FG and the Red Devils would keep things close down just six at the half, 37-31.

Lower Columbia continued to struggle to guard the 3pt line in the second half, and the Warriors went on make 10/17 threes building the lead to as large as 17 points.

Bakalarski led the way finishing with 33 points on 11 of 19 shooting and freshman guard Landon Radliff would add 21 points and 6 assists.

The Warriors will reach the Championship game for the first time since 1982 having won it last in 1979 and will face the Tacoma Titans in the 45th Men’s Basketball NWAC Championship.