Warriors down LCC, headed to Final 4 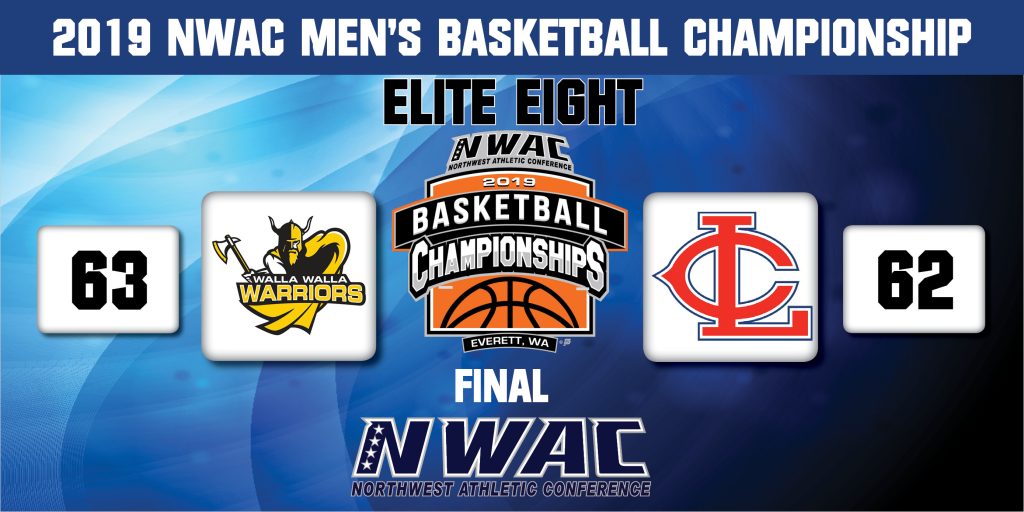 But somehow, someway the Warriors found a way to hang on and defeat Lower Columbia College 63-62 and advance to the NWAC Championships Final Four for the second time in three seasons.

The Walla Wallans, who won the NWAC title in 2017, will take on East Region rival Spokane here next Saturday at 7 p.m. in the tournament’s second semifinal game. The Sasquatch, who split with the Warriors during the regular season, reached the semifinals with a 93-69 victory over Whatcom in an earlier quarterfinal game here Friday.

In the other half of the bracket Friday, East champion North Idaho and South champ Lane passed their quarterfinal tests. The Cardinals defeated Centralia 84-56 and the Titans outscored Green River 90-80.

“We have done really really well,” WWCC coach Jeff Reinland said of his team’s success throughout the season and at this year’s NWAC tourney. “The guys have worked hard, practiced hard and prepared hard, and we are going to give Spokane our best shot.”

Or, for that matter, Chemeketa, the team the Warriors defeated 76-57 in Thursday’s first-round game.

“We just did not play well offensively,” the veteran WWCC coach said. “We struggled offensively in both games, Friday night especially.”

The Warriors shot just 39 percent from the field and 22 percent from 3-point distance against the Red Devils. They were an even cooler 32 percent overall and 15 percent from long range in the first half and trailed by 12 points, 38-26, at the intermission.

“I just told them the only reason we were down 12 points was because we were not making shots,” Reinland said of his halftime assessment. “We had wide open looks in the first half and didn’t make any of them. And that made every defensive possession stick out like a sore thumb. The message was simple. Find a way to get the ball in the basket, and we did that just enough.”

The Warriors still trailed by 10 points, 42-32, with 13:30 remaining in the game when sophomore guard Forrest Smith started WWCC’s comeback with a 3-point basket.

A basket by sophomore post Jake Albright cut the Red Devils’ lead 42-37 less than a minute later, and a 2-pointer and a 3-pointer by Damen Thacker in a span of 32 seconds drew the Warriors within two points, 44-42, with 11:30 on the second-half clock.

Walla Walla finally caught Lower Columbia at 50-50 on a pair of free throws by Albright at the 6:58 mark. And another 3-pointer by Smith gave WWCC its first lead since early in the first half, 53-52, with 6:13 to go.

The Warriors extended their lead to six points, 61-55, on Albright’s jump hook with 2:24 showing, and a pair of free throws by Thacker secured a 63-60 Walla Walla lead with 30 seconds to play.

But Thacker and Smith also missed the front end of one-and-one free-throw opportunities in the final minute that gave the Red Devils a chance.

LCC’s Alec Canete-Hall knocked down a jump shot with 10 seconds to play that cut Walla Walla’s lead to 63-62. And after a Warriors turnover, Canete-Hall got off what would have been a Red Devils game-winner with two seconds to play, but the shot fell short.

“We went from six points up and at the line with a chance to make it eight to a one-point lead in about 25 seconds,” Reinland said. “We could have blown that game open and didn’t, but the main thing is we won the game.”

Albright led the Warriors with 26 points and 15 rebounds.

“Jake was our primary weapon down low with his jump hook,” Reinland said of Albright. “But it wasn’t until about the 12-minute mark of the second half that we convinced him to park in the post and get that jump hook going. That is what he did and that is what got us going.”

Walla Walla will take a 21-10 mark against Spokane next weekend.