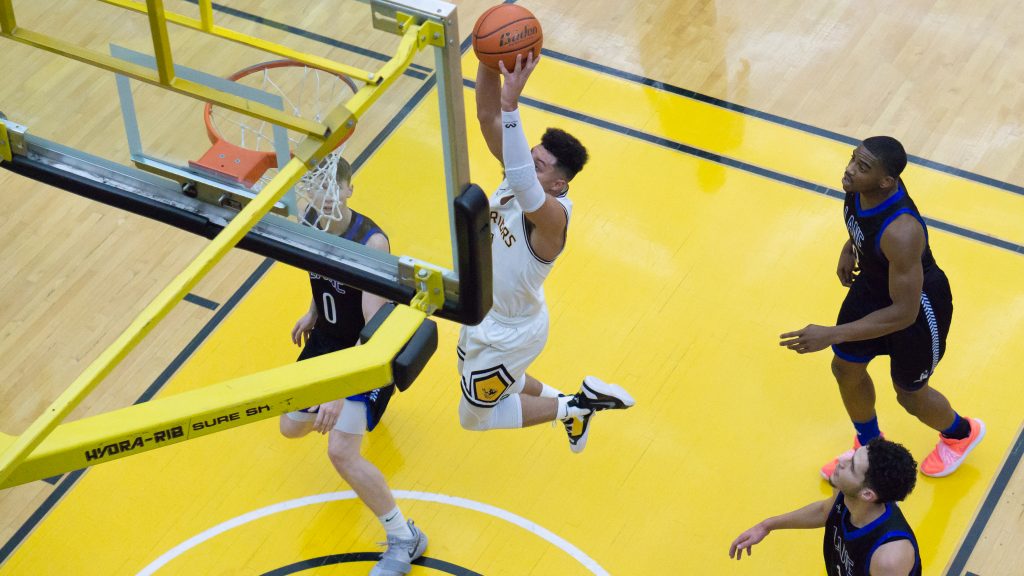 As Jeff Reinland awaited word Sunday on his team’s draw at the Northwest Athletic Conference Championships that begin Thursday in Everett, he had four wishes.

As it turned out, Reinland got one of his wishes. The Warriors won’t have to play in Thursday’s 8 a.m. tournament lid-lifter that tips off the round of 16.

Instead, the Walla Wallans will take the floor late Thursday night for the eighth and final game of the first round.

And as the No. 2 seed out of the NWAC’s East Region, Walla Walla will be matched against South Region No. 3 seed Chemeketa in the scheduled 10 p.m. game.

If the 20-9 Warriors can get past the 18-8 Storm, there’s a very good chance they will meet up with the host Trojans in Friday’s quarterfinals. Everett won the North Region championship with a 14-0 record and will take a 22-7 overall mark into Thursday’s first round against Lower Columbia in the game immediately preceding the Walla Walla-Chemeketa game.

Lower Columbia finished fourth in the West Region with an 8-6 record, 18-10 overall, and the Red Devils will be a decided underdog against the Trojans playing on their home floor.

“It’s not a great draw,” Reinland said of his team’s first-round game. “Any time you have to play the 10 o’clock game it’s tough, but both teams have to do it and Chemeketa is a good basketball team. Then if we win, assuming Everett beats Lower Columbia, which may or may not happen, we have to play them on their home court. So it is not a good draw for sure. I guess of the four things I didn’t want to happen, I got ‘em all … or at least three of them.”

Reinland has his team back to the NWAC Championships for a third straight year and for the 19th time in his 26 years in charge of the program.

The Warriors won their only NWAC title under Reinland two years ago and were eliminated in the quarterfinal round last year.

This year’s team has overachieved, Reinland has said on more than one occasion during the course of the season.

They won their first five non-league games and then lost eight of their next nine contests, a string of failures that overlapped into league play.

But Reinland noted that his team played without sophomore Jake Albright during the losing streak as the 6-5 post recovered from a knee injury.

Albright returned in time for league play and the Warriors went on an eight-game winning streak and enter this weekend’s tournament with 13 wins in their last 15 games.

And both defeats came at the hands of East Region champion and defending NWAC champion North Idaho, which enters the tournament with a 27-2 record and is the prohibitive favorite to make it two straight titles in Everett.

The powerful Cardinals suffered both of their losses early in the season to out-of-state competition. They lost 89-80 to San Francisco City College Dec. 8 in San Jose and to Mesa Community College 69-68 Dec. 27 in Mesa, Ariz.

North Idaho has since run roughshod over its NWAC East Region rivals, running the table by averaging 116 points a game with an average winning margin of 41 points a game.

Treasure Valley, unable to qualify for the tournament, gave the Cardinals their stiffest test during the league season, losing 97-89 in Ontario, Ore.

Spokane is the only other East team to hold North Idaho under 100 points, losing 99-65 when the teams met in Spokane and 96-67 in the rematch in Coeur d’Alene.

Walla Walla was a 101-76 loser to North Idaho when the teams tangled Jan. 12 on the Cardinals’ home floor. The Warriors fell 100-69 five weeks later in the Dietrich Dome.

WWCC’s only other league defeat came Jan. 2 in Spokane when the Sasquatch handed the Warriors an 80-72 setback in the East opener for both teams.

“The only team to beat us since then is North Idaho,” Reinland said. “And they did beat us. They are obviously the favorites to win this thing.”

But Reinland likes the way his team is coming into the postseason.

“I feel good about it,” the coach said. “We are playing well, pretty confident. I feel like we are right there where we can beat anybody. At the same time, I realize that we can be a little streaky. It’s not like we are going to steam roll through this thing. We are going to have to play well, play smart and shoot the ball well. It’s going to be interesting.”