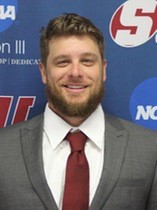 Casey Collins enters his first season as the Head Men’s Soccer Coach in 2021. Coach Collins comes to Walla Walla after serving as the Head Coach at Schreiner University in Kerrville, Texas.

During his tenure, the UHV Men went 36-13-4 overall and 25-7-4 in conference play, with three consecutive trips to the Red River Athletic Conference (RRAC) tournament. In 2017, UHV won the RRAC Championship and advanced to the NAIA national tournament for the first time in program history while receiving votes nationally. During his time at UHV he coached 1 NAIA All-American, 3 RRAC Conference defenders of the year, 1 Conference Newcomer of the year, 2 1st team and 5 2nd team NSCAA All-Region players, 9 1st team and 6 2nd team all-conference players.

In that same timespan the UHV Women went 28-19-2 overall and 18-13-1 in conference. During the 2015 season, UHV were ranked as high as #20 in the NAIA National polls, the first time the program had ever been nationally ranked. The women had 4 1st team and 3 2nd team All-Conference players.

Collins joined UHV after spending three seasons as the assistant coach at Shoreline Community College.  While at Shoreline, Collins helped the program to an overall record of 32-20-10 and two NWAC quarter final appearances, coaching the NWAC player of the year and multiple NWAC All-Stars. Prior to Shoreline he spent a season working with the goalkeepers for the Bellevue College Men’s soccer program.

In addition to his collegiate coaching experience, Collins also served as the associate head coach of the Snohomish Skyhawks during the 2014/2015 season. The Skyhawks are a member of the PASL, a nationally run semi-professional indoor soccer league.

At the High School level, Collins coached the St. Joseph’s High School girls’ team in Victoria, Texas, making the postseason in both seasons. He also spent four years as an assistant coach for the Bishop Blanchet High School girls’ varsity soccer program and two with the Shorewood High Schools boys’ varsity program. Both programs made multiple state tournament appearances during his time with each team.

At the club level, he has most recently coached with Boerne Soccer Club FC Thunder. He was also a member of the coaching staff for Seattle United youth soccer club, one of the largest youth clubs on the West Coast.

A native of Seattle, Washington, Collins graduated from The Evergreen State College in 2011 with a B.A. in Urban Planning and his MBA in Ethical Leadership from Schreiner University in 2021. After graduating he went on to play professionally with the Kitsap Pumas where he was a member of the 2011 PDL National Champions. He also spent five seasons playing and coaching in the PASL. He currently holds his USSF National “C” license, NSCAA Advanced National Diploma, as well as his NSCAA Advanced National Goalkeeping license.