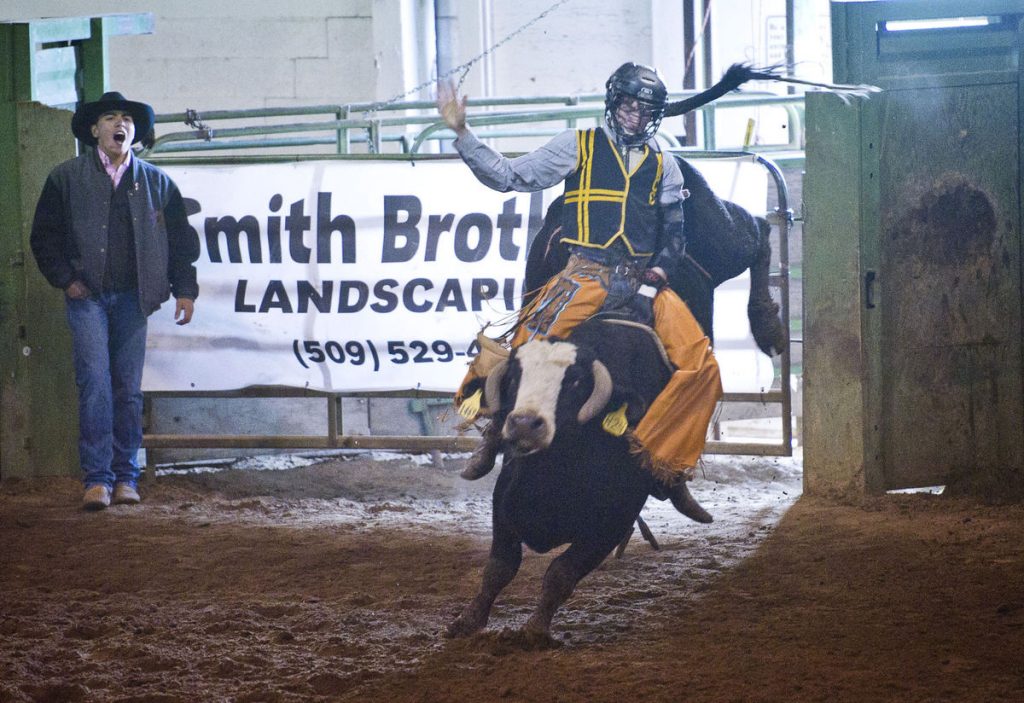 The curtain closed on college rodeo action on Sunday at the Southeastern Washington Fairgrounds as Walla Walla Community College concluded the short-go of its annual College Rodeo.

The Warriors brought home two individual event champions, but the real winner, as always, was the Child Abuse Prevention Council.

“With the amount of help we have from volunteers, the Exchange Club, and the Council, it’s a group effort and it pays off every year,” WWCC rodeo coach Buster Barton said. “The weather was overcast and fairly warm and people came out. To date (not including 2017, as figures have not been tabulated) we have donated, over the life of the rodeo, over $425,000. The school stands behind the program and the community is just amazing.”

Only one bull rider had a qualifying ride to earn a spot in Sunday’s finals.

Warrior cowboy Cody Hudson, the defending collegiate national champion, rode his bull to a score of 82 in Saturday’s performance. Hudson was the only cowboy to defeat a bull in the rodeo.

Hudson got a chance to go 2-0 as the only competitor Sunday. Hudson got on top of a spinning bull and hung in there for six-plus seconds, but in the end, the bull won as Hudson took a seat on the arena floor before the eight-second whistle sounded.

Hudson still claimed the first-place spot in bull riding for his weekend efforts.

The Warriors placed three of the four competitors in Sunday’s short-go in steer wrestling.

Zach Raley’s steer checked up and he had to take a no time.

Hayden Hall, who came in one-tenth of a second out of the lead, got his steer down, but broke the barrier and settled for a 14.5 Sunday time.

Warrior cowboy Cody McCleary came into Sunday’s go with a 5.8 run on his first steer, a one-tenth of a second lead over Warrior teammate Hall, and wrestled his steer to the ground Sunday in a rodeo-best 5.5.

McCleary took the steer wrestling crown with a 11.3 average on two head.

“It (the run) felt pretty good,” he said. “I got a good horse as my teammate Hayden Hall let me get on it. My hazer JT (Blue Mountain cowboy JT Garland) has been getting me. Can’t do without those guys. It was a good steer as I saw him last night when Hayden had him. The steer was going out there and let me catch him and throw him down.

“I’m setting fourth in the region (top three individuals qualify for National Collegiate finals in Casper, Wyo., in June),” McCleary added. “I didn’t go last year. I’ll take it one day at a time and see (if I can make it to finals).”

“I take special pride in all the events,” Barton said. “It is fun to see the steer wrestlers do well as that was my main event. Three of the four were from Walla Walla. That’s always good. We’re kind of known for our timed events even though we have a national champion bull rider (Hudson), but our practice here in timed events due to Brent Palmer is the best in the country.”

In tie-down roping, Boise State’s Wyatt Williams came in third with a 12.4 on his first head. Williams turned in a 12.3 Sunday to give him a 24.7 average on two and earn the tie down title.

Jhett Hale was the only Warrior to get his calf on the ground (13.0) Sunday. Hale’s average of 26.5 was good for third.

WWCC cowboy Tucker Hill rode his Sunday saddle bronc to a score of 73, and coupled with his 74 on his first ride, finished second with an average of 147.

Treasure Valley’s Jake Clark had a 79 on his first ride, and got just enough Sunday with a score of 70 to edge Hill by two, 149-147, for the saddle bronc title.

On the cowgirl side, WWCC’s Rayna Longeway qualified for the Sunday-go in breakaway roping, but missed her Sunday calf.

Blue Mountain’s Danyelle Williams, came in with a 3.0 on her first calf, but broke the barrier on Sunday and managed only a 12.7.

Treasure Valley’s Keeley Vaughn came from fourth place to post the quickest time of Sunday’s go, 4.3, and with her 4.2 on her first calf, Vaughn took the title with 8.5 on two.

Longeway with 16.6 on two finished fourth.

McLaughlin with 16.8 on two finished sixth.

Treasure Valley’s Dalli Bean ran a 14.29 Sunday and won the barrel racing title with 28.66 on two.

“Jaime Jo had a great day today,” Barton said. “She had that 7-flat in goat tying. It’s fun to see kids succeed, especially ones that work so hard at it. She (McLaughlin) is one of those.”

Landon Heryford on the head, and Tim Messner on the heals, won the team roping with a clean run of 6.8 Sunday. Heryford and Messner posted a rodeo best 19.4 on two head.

The Warrior men came into the Walla Walla rodeo holding onto a finals qualifying second place in the region. The Warrior cowgirls came in third and just out of claiming one of the two team spots to Casper.

The Warriors’ next action is at the Milton-Freewater rodeo in mid April.