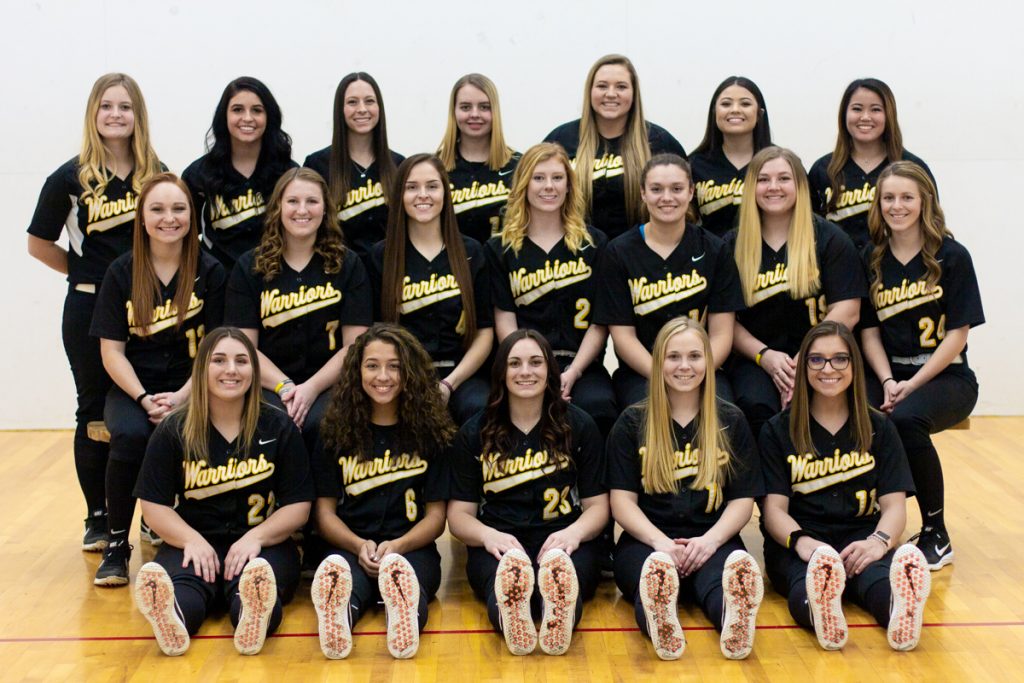 “I got here just in time for practice to begin,” said Parker, who spent the four previous seasons as an assistant coach at Fresno City College in California. “I showed up, met the girls and we were ready to rock and roll.”

Needless to say, Parker didn’t have the opportunity to recruit a single player for this year’s squad. That was left up to former head coach Justin Speer and his staff.

Speer stepped down as WWCC’s head softball coach after three successful seasons to take over the Warriors’ baseball program in place of Dave Meliah, who resigned the position at the end of the 2018 season.

But it didn’t take Parker long to discern that he wouldn’t be starting from scratch in his first season in charge of the softball program.

“The first thing I noticed, even though I didn’t recruit any of these players, is that we were loaded with talent,” the new head coach said. “We have a lot of freshmen, but they are very talented freshmen, and we were already moderately prepared for the fall travel schedule.”

The Warriors played in a fall exhibition tournament in Portland and also scrimmaged College of the Siskiyous and Northwest Athletic Conference rival Wenatchee before heading indoors and waiting for spring.

And as it has turned out, they are still waiting.

Because of February’s record snowfall and extended cold weather, WWCC practices have been limited to the Dietrich Dome and the school’s indoor hitting cages ever since.

They experienced dirt and grass for the first time in nearly four months last weekend when they traveled to Longview, Wash., where they opened the season with two wins, one loss and a tie.

“It was beautiful,” Parker said of the weather conditions at Lower Columbia College. “It was 50 degrees and blue skies, something we haven’t seen in a while. The field was in great condition, too. I’ll have to say that I was a little envious, but it is what it is.”

The Warriors normally open the season with a long homestand since other NWAC teams are eager to take advantage of favorable weather in the Walla Walla Valley.

But for the second weekend in a row, WWCC home games have been rescheduled elsewhere. The Warriors will play two games at Clackamas CC in Oregon City, Ore., Friday beginning at 1 p.m. and will take on Southwest Oregon in a Saturday doubleheader at Tigard High School in Portland slated for an 11 a.m. first pitch.

“We went into those games without any field time,” Parker said. “That being said, the girls competed really well. I think it’s all coming together,” he added. “The more time we are together and get on the field, our experience and maturity will continue to grow. We have a young, competitive team that will in time be pretty special.”

Parker’s 24-player roster includes just six sophomores. With one exception, the remainder of the squad is comprised to true freshmen getting their first taste of college competition.

However, a pair of sophomores, Rosie Cantu and Abby Giles, will form Parker’s one-two starting pitching punch. Cantu tossed a three-hit shutout in WWCC’s 8-0 victory over Pierce on Saturday.

Freshmen Courtney Call of Ogden, Utah, the team’s only lefty, and Makinley Miller of Stansbury, Utah, will be called upon to pitch in relief, Parker said.

The Warriors blasted five home runs by five different players during their four games in Longview, suggesting there’s plenty of power on this year’s squad. The homers came off the bats of sophomore Kira Haskell and freshmen Caitlin Crist of Twin Falls, Idaho, Gabby Beckstrom of Spanish Fork, Utah, Rylee Gentner of Pendleton and Ogden’s Call.

“Power is one of our strengths,” Parker said. “We have some big hitters, some hitters who know how to find the gaps, and we have some girls who are fast and can lay down a bunt. It’s all about having all of the pieces. Not all home run hitters or all slap hitters, I want an all-around team.”

Parker graduated from Jerome High School just north of Twin Falls in the southern part of the state. He played one year of basketball and three years of baseball at Northwest Nazarene University in Nampa, Idaho, and broke into coaching as an assistant softball coach at his old high school in 2014.

“That very next year I got a call from the Fresno City softball coach saying they were looking for an assistant coach,” Parker said. “We are originally from Fresno and most of my family is from the central valley.”

So Parker applied for and was hired at Fresno City, where he coached, taught kinesiology and earned his master’s degree.

Four years later, another family connection helped bring Parker to Walla Walla. His younger sister, Lyndzie Parker, was a softball player at WWCC in 2016-17 before transferring on to Northwest Nazarene where she is a senior member of the Nighthawks’ softball team.

With this weekend’s games rescheduled for the west side, the Warriors won’t play their first home games until March 29 when they entertain Yakima in a Northwest Athletic Conference East Region twin bill. By then, they will already be eight games into their league season, which begins with twin bills at North Idaho and Spokane March 15-16, weather and field conditions pending.

Parker concedes that he’s not sure what his team will be up against once the East Region season commences.

“I really don’t know much about any of these teams,” he said. “Regardless, we will go and play each team like it is the last game of the year. This is a competitive team that wants to win, and that is our plan. Win as many games as we can, control what we can control and get better each day. We want to be that team to beat at the end of the season.”