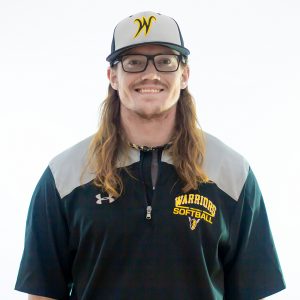 Coach Parker begins his fourth season at the helm of the Walla Walla softball program. During his time at WWCC, Coach Parker helped develop many first team all-tournament/all-conference athletes, many of which are playing at the four-year level. Prior to his time at WWCC, Coach Parker worked 4 seasons as an assistant coach at Fresno City College under Rhonda Williams, FCC’s all-time winningest softball coach. While there, he assumed the role of outfielders coach with additional duties overseeing hitters and infielders.

While participating in both baseball and basketball at Northwest Nazarene University in Nampa, Idaho, Parker held a career batting average of .342 and earned Freshman Player of the Year honors in his first season. He was a multi-year first team all-conference selection. Coach Parker graduated NNU in 2013 with a degree in Recreation and Sport Management, with a minor in coaching.  In 2016, he earned his Masters Degree in Kinesiology from Fresno Pacific University.

Coach Parker resides in Walla Walla with his wife Kabina and their Wirehair Pointing Griffon, Wallace.

“As a collegiate coach, my mission is to provide female student-athletes with the skills needed to be successful during competition, but more importantly, in life. By catering to a team first environment where positive attitudes, maturity, and athletic development reign, we will begin to see a complete, positive transformation of the student athlete’s whole self.”