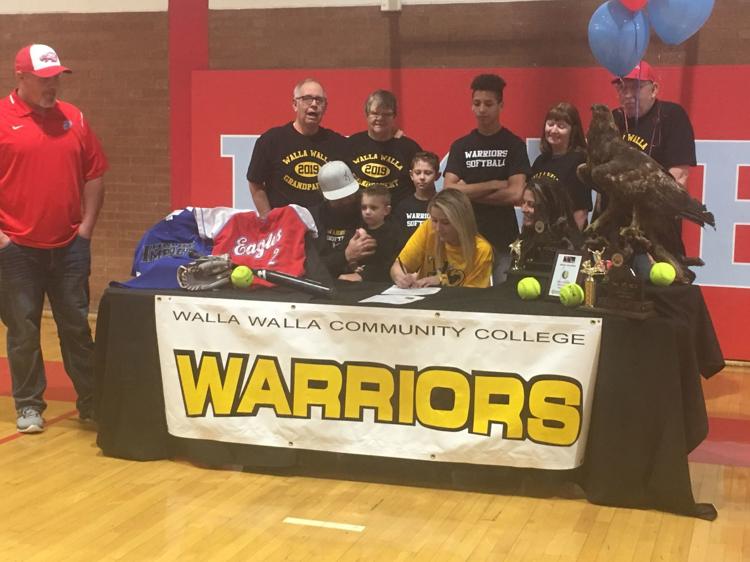 ARIMO — Carter Thornton had a feeling at the end of her visit to Walla Walla Community College.

The Marsh Valley senior went to the school in Walla Walla, Washington, earlier this month and decided to make the community college her home. After spending time with the softball team and coach Logan Parker, Thornton pledged her loyalty to the school.

On Thursday at Marsh Valley High, Thornton made her decision official by signing her National Letter of Intent to continue her softball career at Walla Walla Community College.

“It feels good,” Thornton said. “I was nervous. I was just singing a paper, but it felt good.”

The senior pitcher visited four other schools, including Treasure Valley Community College and Utah State University Eastern, but chose Walla Walla over the others because of the atmosphere.

“I went to Walla Walla and everyone was super nice,” Thornton said. “The coach gave me a lot of confidence. As soon as I left, I knew I wanted to go there.”

Thornton said she expects to be a pitcher for coach Parker and the Warriors. Last season, Thornton compiled a 13-3 record and a 3.48 ERA, helping the Eagles reach the 3A state tournament.

“She is one of the best pitchers in the state,” Marsh Valley coach Joel McQuivey said. “She’s a weapon. She controls the ball so well.”

Thornton also did damage at the plate last season, notching a .475 batting average with 31 RBIs and a team-leading seven home runs.

“She brings a mean bat,” McQuivey said. “When she is on, she can take it yard every time. She is very confident when she steps in there.”

Thornton also made a statement as a freshman, hitting .493 with three home runs and 24 RBIs.

“She has the desire to win,” McQuivey said. “She doesn’t doubt herself. … Her confidence level is what makes her successful. She isn’t afraid.”

When she was 12 years old, Thornton began taking pitching lessons from Highland softball coach Tisha Coverdell. The coach worked with Thornton, helping her develop the diverse array of pitches she brings to the rubber now.

Thornton takes all that hard work into her senior season, her final campaign before heading to Walla Walla.

“I want to get back to state,” Thornton said. “I want to have fun.”

Article by Michael Guise of the Idaho State Journal