The Walla Walla Community College softball team took care of business in Friday’s double-header as they swept Northwest Athletic Conference foe Treasure Valley, 8-0 in the first game and 17-2 in the second.

Things got going in the bottom of the third when Ashton Buffo led off the inning with a double to right field.

After advancing to third on a wild pitch, Buffo would open up the scoring as she came home on a scarifice fly from Rhyanne Oates.

Gabby Beckstrom then singled to center and later scored the second run of the game after a throwing error from the third baseman. 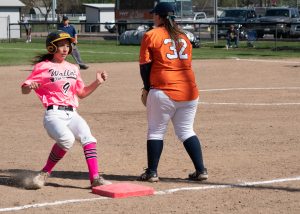 Buffo scored again in the bottom of the fifth, after getting hit by a pitch and going from first all the way home with Treasure Valley throwing away what was only a sacrifice bunt by Caitlin Crist.

The Warriors added two more runs in the inning, off of RBI doubles from Kira Haskell and Brynnan Carpenter to push their lead to 5-0 heading into the sixth.

Abby Giles had things working for her on the mound in this game as she finished with nine strikeouts, zero walks and only gave up four hits and got the complete game shutout.

The Warriors would score three more runs in the bottom of the sixth.

After an RBI double from Buffo and an RBI single from Oates,  Caitlin Crist scored on a Beckstrom groundout to third to put the mercy rule into effect and ended the game in the sixth.

The Warriors picked up right were they left off in the second game, scoring two runs in the first inning.

Beckstrom tripled home Christ, and then later scored off of a Kira Haskell RBI single.

The Warriors then put up a 10-run  second inning, and held a 12-0 lead after two innings.

After scoring three runs in the third and two in the fourth, the Warriors held a 17-0 lead going into the top of the fifth and seemed to have things under control.

Treasure Valley would finally get their first two runs of the day in the top of the fifth.

The first one came after a bunt by Kenzie White and a throwing error by pitcher Abbie Miller that would score Caroline Casdorph.

The next batter, Jenna Gray, would hit an RBI single that would score Alexis Mulvany.

“We played well today,” said Warrior coach Logan Parker. “Treasure Valley is scrappy, and they’re a solid team, and we knew we had to take care of business today if we want to stay in the hunt for our conference. Everything was clicking, our starting pitching was on, our defense was sound and our bats got hot when they needed to so,” added Parker.

“Ashton Buffo had a great day today. It’s all of the extra work she’s been outside of practice, and I think she had three or four extra base hits today. She did awesome, and we need her to play like that tomorrow too, because she’s one of our leaders. Where ever she goes the rest of the team follows.”

The Warriors played a doubleheader at home against Blue Mountain on Saturday, first game starting at noon.

“With Blue Mountain they can surprise you. They got some girls that can play so we just got to bring our “A” game tomorrow. (We) can’t get complacent. We’ve got to play hard because in this conference anyone can compete and beat anyone, so it’s going to be a test, and we’ve just got to bring it to them tomorrow,” concluded Parker.