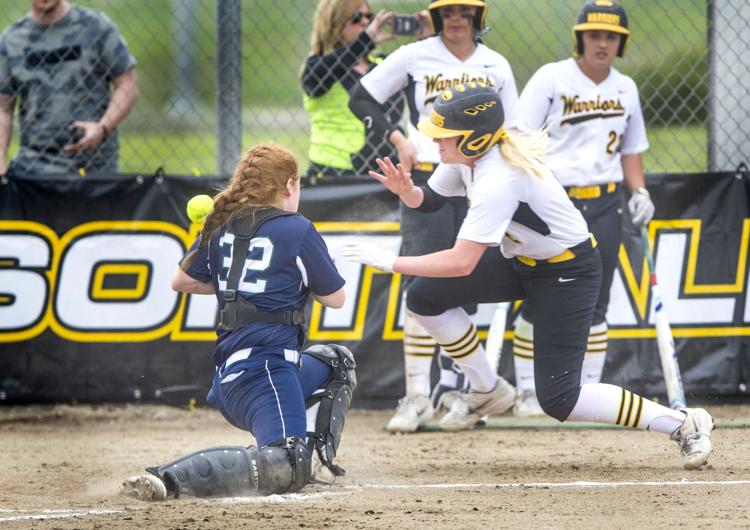 The Walla Walla Community College softball team split its doubleheader against NWAC East foe Big Bend on Tuesday, winning a 3-1 pitchers’ duel in the opener and then lost 10-8 in a home-run-frenzy in the nightcap.

“Game one, I thought we competed, we played really well,” said Warriors coach Logan Parker. “Pitching was there, defense was there, (we) just couldn’t get the bats going. But we still got the win, which is important.”

The Warriors got their three runs in the first two innings of the first game.

In the bottom of the first with one out, Rylee Gentner forced a walk, and then stole second several pitches later.

Teammate Gabby Beckstrom drove her in with an RBI double for the first run of the game, advanced to third on a sacrifice bunt, and scored on a passed ball.

After a scoreless inning from the Vikings, the Warriors put up their third and final run in the second, after Gentner drove in Caitlin Crist on an RBI double.

The Viking’s only run came in the fifth inning, as Lynsey Valverde scored Courtney Williams after grounding into a fielder’s choice.

Abby Giles, in the circle for the Warriors, gave up three hits and struck three batters out.

The second game was the exact opposite of the first, as there were seven home runs smacked by the two teams.

“Game two, we kind of dug a hole,” Parker said. “We gave up a five-spot in the third inning, and we had to work back and we fought back hard, and I’m proud of them. But we got cut a little bit short, ran out of innings,” he added.

Big Bend’s Aubree Barney got things started off in the first inning with a two-out, two-run homer to left field to give the Vikings a 2-0 lead.

The next Big Bend batter, Taryn Mathews, singled on a line drive off the leg of the pitcher Rosie Cantu. Cantu was able to stay in the circl.

Mathews later scored the third run of the inning on a Williams single.

The Warriors were only able to get one run back, as Kira Haskell scored Gentner on a two-out single in the bottom of the first to make the score 3-1.

Big Bend pushed its lead in the second inning after a pair of two-run home runs by Lynsey Valverde and Barney, Barney’s second of the game.

Williams brought in Riley Newbold on an RBI single to cap a five-run inning to make the score 8-1 after two.

The Warriors continued to battle, as they were able to cut the lead in half after a three-run home run to left field by Rhyanne Oates in the bottom half of the second.

Big Bend added two more runs in the third inning to make it 10-4.

Walla Walla finally got its big inning in the fourth, with solo home runs by Courtney Call and Oates, and then a two-run homer by Beckstrom to bring the score to 10-8.

The Warriors were unable to build off that inning and fell short in the end.

“We play a good team on Friday (WWCC heads to Wenatchee Valley for a twin bill), and we need to compete like we did today if we want to get after them,” Parker said. “The girls are showing a lot of heart late in the game, and that’s what we need to see. We have all of the pieces, we just need to start putting them together. But they’re doing a good job.”

Article by Darnell Handcox of the Walla Walla Union-Bulletin