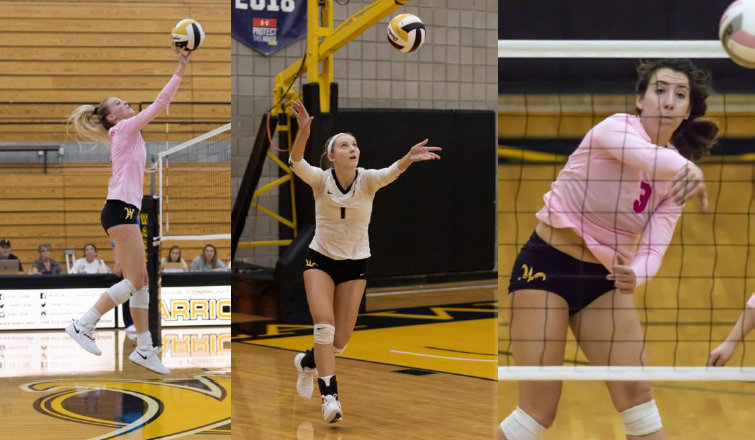 Three WWCC Warrior Volleyball players have made commitments to continue their academic and athletic careers for next year. Morgan Ness will head to Lewis-Clark State College, Abbey Schwager is going to Concordia University in Portland, and Ocean Bryan will be competing at Clarkson University in New York.

Below are the right ups from LC State about Morgan Ness and Concordia about Abbey Schwager. 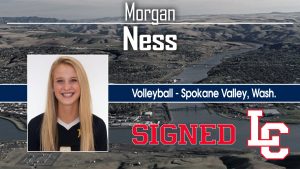 “Morgan has proven she is capable of putting the ball away,” Pohlman said. “She has a quick swing with speed behind the ball which really works well in a faster tempo offense.”

Ness, who was an all-Greater Spokane League choice as a senior and played on two GSL championship teams, is looking forward to continuing her playing career as she pursues a nursing degree. Ness’ club career includes six successive ERVA Region 6 championships, while at WWCC she earned first-team all-region honors and second-team all-NWAC recognition. She also competed on the WWCC rodeo team.

“Being able to play at a four-year school is a huge privilege that I have been given,” Ness said. “I absolutely love the competitive atmosphere and drive for success that is instilled in the program at LC. Knowing that I will experience growth not only on the court but off it as well was an opportunity I couldn’t pass up.”

Her coach at WWCC, Chelsie Speer, said Ness has all the attributes to make a successful transition to and be an integral part of the Warrior program.

“Morgan is a great all-around player,” Speer said. “She is a student of the game, she has the ability to make adjustments quickly, and she’s a quiet leader by example.  We often referred to her as the calm in the storm because of her composure on the court.  We are excited to see her carry on her career at LC State.” 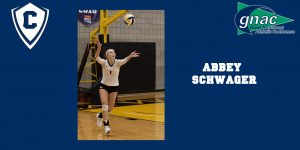 PORTLAND, OR–   Concordia University head volleyball coach Melanie Hambelton has announced the commitment of her sixth student-athlete for the upcoming 2019 season in Abbey Schwager.  The Cavaliers finished the 2018 season with a 12-15 overall record and a 9-11 Great Northwest Athletic Conference (GNAC) season, which placed them tied for sixth place.

“I am looking forward to having Abbey join our program,” said Hambelton.  “She’s a setter out of Walla Walla Community College where she led her team in assists the past two seasons. She has great location on her sets, is a vocal leader and knows what it takes to win.  I see Abbey making us better by providing depth at the setter position as well as bringing maturity to the team since she will be one of three upperclassmen!  Abbey works hard on the court and in the classroom.  She will be a great addition to our program and to the university. We are excited to have Abbey take to the floor in navy and white!”

The Boise, Idaho, native graduated from Timberline High School in 2017.  She was a three-year letter winner and the team captain her senior season.  Schwager set the school record for assists during her senior season.  She also was named  First Team All-Conference and served a perfect game with 25 balls in a row ending the score at 25-0.  The Wolves finished the conference season 14-0 and finished second at state and districts. During her junior season, she was named Second Team All-Conference.  Timberline placed fifth in state and were district champions while going 13-1 in conference.