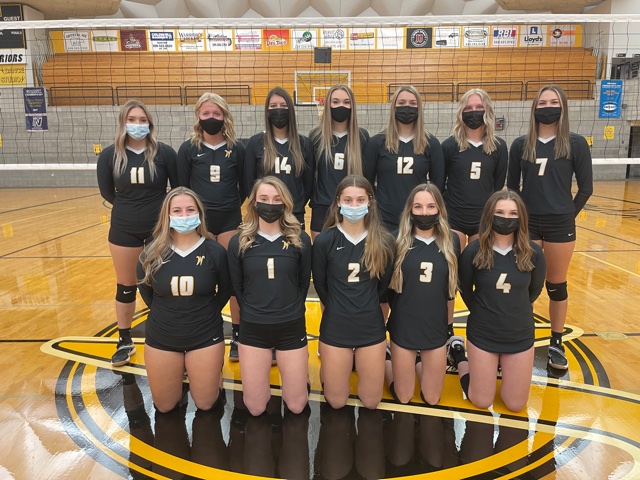 The COVID-19 pandemic turned the world upside down.

That includes the sporting world.

But there are some bright spots among the turmoil for student-athletes, if you look closer.

The quartet, along with their freshmen and sophomore teammates, made the most of it, as WWCC secured a spot in the NWAC Regionals with a sweep of Treasure Valley on Friday, Nov. 5.

That left the Warriors’ record 18-6 overall, and 11-5 in NWAC East Region play, and in a three-way tie for second place with Yakima and Spokane.

That meant head-to-head records among the three teams determined seeding, and WWCC’s 3-1 record against Yakima and Spokane gave the Warriors the No. 2 seed into this weekend’s regional tournament at Linn-Benton Community College in Albany, Ore.

Walla Walla opens play at 10 a.m. on Saturday against Skagit Valley, the third seed out of the North Region.

Tacoma and Linn-Benton square off in the other regional match at 1 p.m. on Saturday, with two team advancing to next weekends NWAC Championships at Pierce College in Tacoma.

The Warriors “Super Sophomores” are optimistic heading into the playoffs.

“I think if we play our game and play how we play in practice, we have a really good chance of winning the whole thing,” Clayton said following a recent match against Columbia Basin. “When we play as a unit and we play as a team, we can be amazing.”

“I think it comes back to knowing everything we’ve faced and all the battles we’ve already won, and using that to fuel ourselves to be as good as we can be,” Tolman said. “And really, really embrace everything that’s been going on.”

The pandemic challenges continued into the season, when former WWCC head coach Chelsie Speer lost her position amid the turmoil of the mandate for COVID-19 vaccinations for state employees.

Rylie Engelson, Speer’s assistant who stepped in as head coach in October, said the “Super Sophomores” have been instrumental in the transition.

“Huge!” Engelson said of the quartet. “Chelsie Speer instilled grit and resilience out of them constantly. And they demand excellence every single time they step out on the court from their team — every single time.

“They’ve persevered through all sorts of obstacles in life, and the situation that happened with coach Speer,” she said. “It’s fighting adversity constantly, and they’ve been fantastic leaders for this entire program by leading by example, which is huge.

“They’ve helped me more than I helped them, I feel like, in certain ways,” Engelson said. “They know what they need to do, they take over and lead when they need to. It makes my job easy!”

Despite the challenges, three of the “Super Sophomores” (Doyle was missing from the lineup during the Columbia Basin match due to COVID-19 protocols) are enjoying their run to the NWAC Tournament.

“I’ve had a great time,” Bretz said. “Honestly, I don’t think I could’ve done it without these two and Mollie by my side. The team is great, the coaching staff is great.

“It’s unfortunate what happened with our head coach Chelsie, but I know I wouldn’t be here without her, or Rylie taking over, or Tim (assistant coach Tim Toon). It’s been great.”

“It’s been a little crazy with all the COVID mandates, but it’s been so much fun playing with the actual sophomores another year and getting to know the freshman, and playing with our ‘Super Sophomores’ again,” Clayton said. “I was sad to move on, but when I heard we got to come back, I was so excited!”

“This year’s been good,” Tolman said. “I did not get a chance to play my freshman year due to an injury, so this year has been so much fun getting to play with my teammates and especially these third years who’ve helped me through my injury and to come back. I wouldn’t be here without them, they’re the best.”