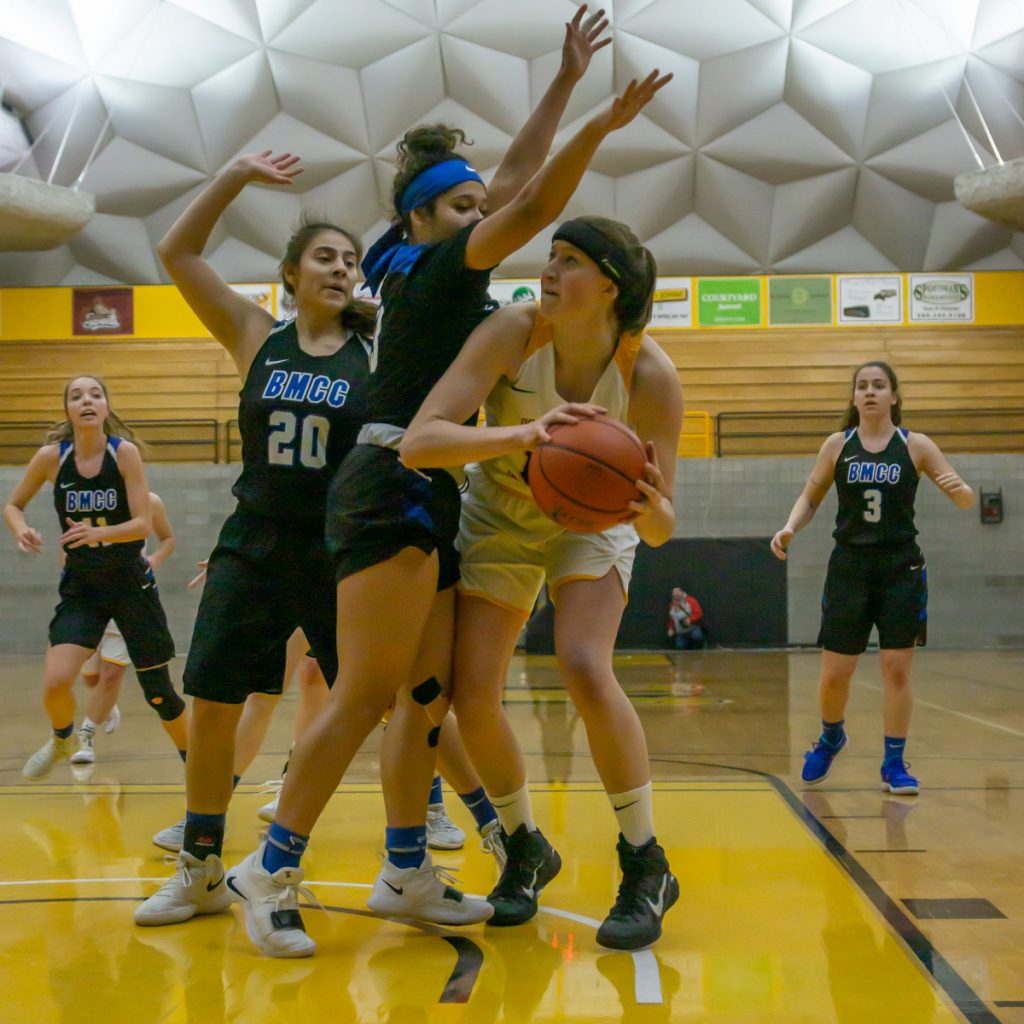 PENDLETON — Walla Walla moved to within one victory of punching a ticket to next month’s Northwest Athletic Conference Championships here Wednesday night with a 63-36 East Region women’s basketball victory over Blue Mountain.

The Warriors improved to 9-5 in the region, 19-8 overall, and remain tied with North Idaho (9-5, 19-7) for third place in the East standings. The Cardinals defeated Spokane 69-57 Wednesday.

But Yakima, which drew the bye Wednesday, remains in the hunt for the East’s fourth and final berth in the season-ending tournament in Everett. The Yaks are 7-7 in league games and 16-10 overall.

A victory in either, or one more Yakima loss in its final two games, is all the Warriors need. The Yaks host North Idaho Saturday and travel to Wenatchee (10-3, 21-5) next Wednesday.

Warriors coach Bobbi Hazeltine would prefer to get it done Saturday against the rival Hawks from Pasco. But she knows it won’t be easy.

Walla Walla defeated the Hawks 77-67 when the teams met in the first round of league play Jan. 26 in Pasco. But in a non-league affair in the championship game of the season-opening Yakima Invitational on Nov. 18, Columbia Basin prevailed 63-61 and snapped a 32-game WWCC winning streak dating back to that same tournament’s championship game the previous year.

“It’s going to be a challenge for us,” Hazeltine said of Saturday’s game against the Hawks. “Their record doesn’t show how tough they are playing people. They’ve lost a lot of really close games.”

It will be a game of contrasting styles, Hazeltine said.

“It’s two fairly evenly matched teams, but totally different teams,” she said. “CBC is small and really quick and they shoot it well, so we have to use our height advantage and slow them down.”

“We had been letting teams jump on us right away because our zone wasn’t covering the right shooters,” Hazeltine said. “So we decided to try the man against certain teams and we feel a lot better about it. We still have the zone, but our man is getting better. And we are probably going to have to play man against CBC.”

The Warriors played 40 minutes of man-to-man defense against Blue Mountain Wednesday. And it worked to near perfection.

The Warriors held Blue Mountain to 31 percent shooting from the field overall and 20 percent from 3-point distance. And most impressively, they were whistled for just four fouls.

“We defended really well,” Hazeltine said. “Our goal was to play good defense and keep them off the foul line, and we did that.”

The Warriors, who have now won three in a row for the first time since league play began, evened the score with Blue Mountain after suffering a 71-58 home-court loss to the Timberwolves on Jan. 23. It still stands as Blue Mountain’s only league victory of the season.

“We were thinking about that game, but not to show them, it wasn’t that,” Hazeltine said. “It was about playing better than we played them the last time.”

An 18-4 Warriors outburst in the first quarter set the tone. Walla Walla led 33-14 at halftime and 50-23 going into the fourth quarter

“We just had a lot of energy in the first quarter,” Hazeltine said. “We knew what a big game it was and we came out and had a great start. We got up and down the court and did some really good things.  But as a coaching staff we felt we lost our energy after that. It was a quiet night with not a lot of people there, and we didn’t have anything to feed off of and it showed.”