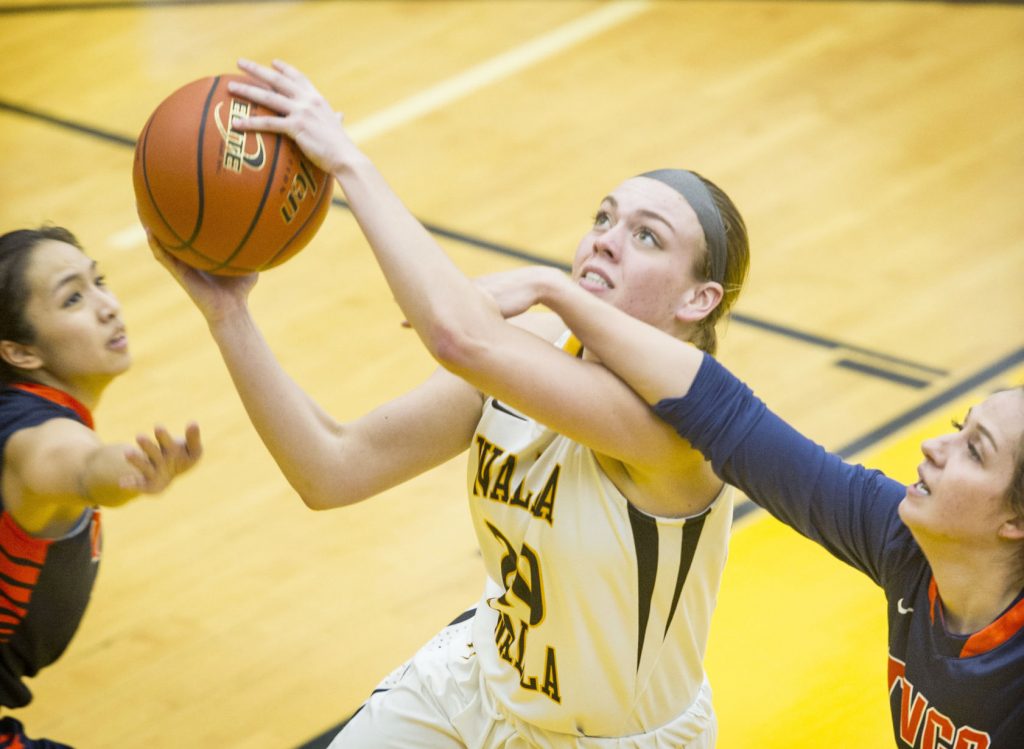 Cierra Jo McKeown became the top scorer in the history of Walla Walla Community College women’s basketball, as the Warriors picked up their 26th straight victory with a 76-51 win over Treasure Valley to wrap up the regular season of Northwest Athletic Conference action here on Wednesday.

Treinen, a member of the 2010 NWAC champion Warriors, was on hand at the Dietrich Dome on Wednesday in her fifth year as an assistant coach.

“It’s been standing for eight years or so,” said Warriors head coach Bobbi Hazeltine, now in her 19th season at the helm. “We won the title when (Treinen) was playing. We haven’t had anybody as good for a while, and Cierra can score, obviously.”

McKeown broke the record despite something of an off-night. Although already averaging 22.7 points per game, she came in a 49.7-percent shooter from the field, but made 8-of-21 (.381) against Treasure Valley.

And for the first time in more than a month (Jan. 26 against Columbia Basin), McKeown did not finish a game as the top WWCC scorer. Taylor Turner put up a game-high 24 points on 10-of-18 shooting while for the Warriors, while teammate Jade Skidmore had 18 points.

“Cierra missed a lot of shots she’s normally makes, but Jade Skidmore and Taylor Turner — they were kind of a two-person show tonight,” Hazeltine said. “Taylor easily had her best game of her career, and Jade was good too. Two double-doubles there, and they both played really well.”

Now, after dominating the regular season for almost four months (26 straight wins after a lone loss at the Yakima Tip-Off Tournament back on Nov. 19), the Warriors find themselves as just another one of the 16 teams in the NWAC Championship Tournament — set to begin next Thursday, March 8, at Everett Community College.

WWCC will learn of its first-round opponent at the Bracket Selection Show in Everett on Sunday.

WWCC returns to the postseason tournament a year after finishing with an overtime loss to Spokane in the championship game.

“We have five sophomores,” Hazeltine said. “It fuels our sophomores because they were there, and they had to watch someone else get a trophy.

“But everybody’s ready to go,” she continued. “We want to go. We want to get back to that game.”

The Warriors overcame a pesky Treasure Valley on Wednesday.

WWCC opened the game with eight unanswered points, and went to lead the whole night, but the Chukars refused to go quietly. They got to within 17-16 with a minute left in the first quarter.

The Warriors then began to pull away with a nine unanswered for a 32-19 lead midway through the second quarter.

WWCC had increased its lead to 41-21 when the frustrated Treasure Valley bench picked up a technical foul shortly before halftime.

Treasure Valley however only continued clawing back in the third quarter, but the Warriors managed to maintain at least a 15-point edge before pulling away in the fourth.

“We started out great,” Hazeltine said. “Our second quarter was good. We were feeling good at halftime, but kind of a let-down in the third quarter.

“I know Treasure Valley was playing for something,” she continued. “They needed to win, so I thought they came out and played really, really hard. For some reason we weren’t great in the third, but we came back and played well in the fourth.

“Sometimes we get a lead and we let up instead of just pouring it on,” she added. “Girls do that. I don’t know why, but we felt pretty good the whole time.”