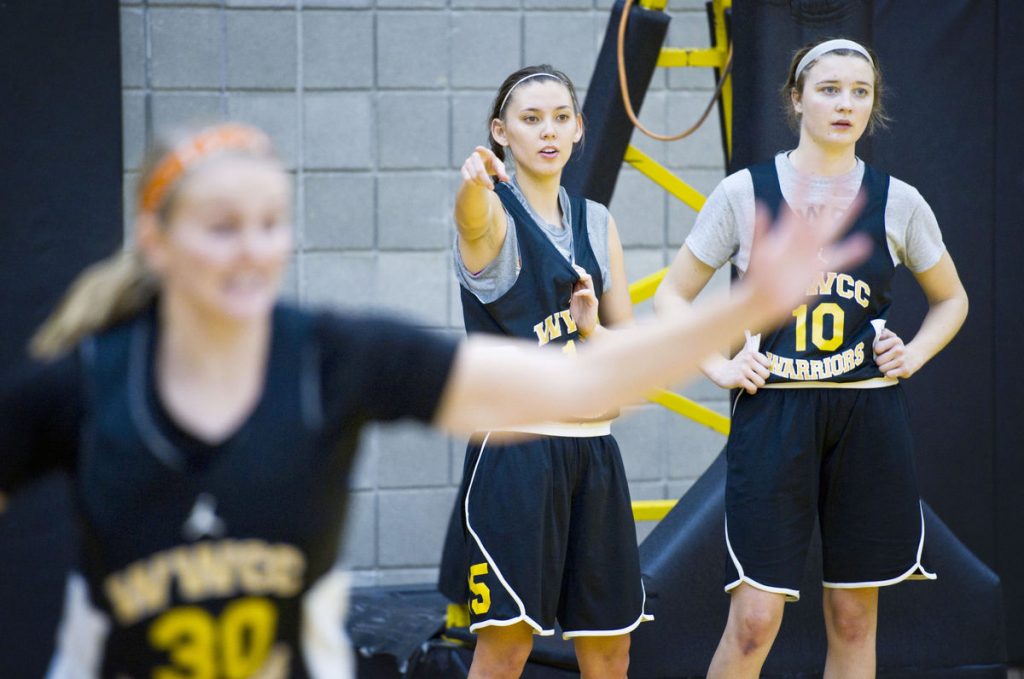 When Teresa Acock learned that Cierra Jo McKeown had decided to begin her collegiate basketball career at Walla Walla Community College, she was not happy.

In fact, she cried. Or at least that’s how Cierra Jo teased her best friend a year-and-a-half later as the two Warriors guards approached their sophomore seasons at WWCC.

“I was pretty upset,” admitted Teresa, who had already confirmed her intentions to join coach Bobbi Hazeltine’s WWCC women’s program. “In fact, I was not going to go there because she was.”

Fortunately for both young women — and for coach Hazeltine as well — Teresa didn’t follow through on that initial instinct. Partly, she said, it was because of her grandfather, former Warriors football coach and longtime WWCC administrator Jerry Anhorn.

“My grandpa has always wanted me to go there,” Teresa said.

Teresa and Cierra Jo were good friends early on, playing on the same AAU basketball team when they were in the third and fourth grades. And then something happened.

“We were hanging out, car pooled together, and then she got mad at me for something,” Teresa remembered. “We were best friends and then she didn’t like me anymore, and we went our separate ways.”

Teresa’s way led to DeSales High School where she was a four-year all-conference basketball player.

Cierra Jo attended Touchet High, was also all-conference for four years and earned all-state honors as a junior and a senior.

Both girls also excelled in volleyball and softball as high-school athletes.

Even though the Irish and Indians play in different leagues and in different classifications, there’s a longstanding rivalry between the two schools. And the rivalry that evolved between Teresa and Cierra Jo on the basketball court was not altogether friendly.

“We played them one time each year, and it was always the most competitive game,” Teresa explained. “I would gear myself up because we were playing Cierra Jo, and she was always the best.”

Cierra Jo’s Indians won the first three games between the two schools. But Teresa’s Irish came out on top their senior year.

“We won by eight points and I cried — for joy,” Teresa said.

For her part, Hazeltine coveted both players.

Cierra Jo, who at 5-foot-9 is four inches taller than Teresa, was the bigger catch because she had been recruited by several four-year schools. But the Warriors coach had plenty of interest in the Irish star as well.

“Teresa had been coming to my summer camps since she was in the second grade,” Hazeltine said. “So we’ve known about her for a long time, and she had a great career at DeSales.

“It was always in the back of my mind that we wanted her. I just didn’t know if she would be big enough to play at this level.”

Hazeltine did know that her two prized local recruits were at odds with another. Her solution was to step back and let the relationship work itself out.

“It’s interesting the way it happened,” Hazeltine said. “We had a team barbecue at my house before the season began, and a lot of my players are from Idaho and they all know one another. And because of that they hang out with one another.

“Cierra Jo and Teresa were the two loners. They didn’t know anybody else and were forced to hang out together.”

It didn’t take long for the ice to melt, Hazeltine said.

“I think they realized each other was not as bad as they thought,” she said. “They didn’t care for each other and now they are best friends and inseparable. It’s been fun to see them grow into this friendship.”

“In the summer before school started, we would shoot together in the Dietrich Dome,” Cierra Jo remembered. “At first it was kind of awkward, but we just talked and the awkwardness went away. I always knew we would end up being friends.”

Shooting in the dome became a religion for McKeown and Acock this past summer as they sharpened their skills in hopes of a return trip to the Northwest Athletic Conference’s championship game next March in Everett. The Warriors lost to Spokane 76-73 in last season’s title game.

“We have a summer program that we call 10,000 Makes,” Hazeltine said. “They have to make them, not just shoot them. I always tell people if it’s not makes, you get good at missing.

“We’ve got a lot of other drills as well, and we encourage all of our girls to do them,” the coach added. “A lot of them don’t but these two did. They embraced all of the drills all summer long, and they are two of the best shooters I have ever coached.”

Her mother, Malissa, graduated from Touchet High in 1986 and was a star player for the Indians for four years, played two years at WWCC, one year at Corban College and one year at Walla Walla College. Tim McKeown, Cierra Jo’s father, played for Jim Thacker at Wa-Hi and played one season at WWCC.

“Cierra Jo and I are similar players, but she is longer,” said Malissa, who was her daughter’s high-school coach for four years. “We started her shooting when she was probably 4 years old and she always picked things up quickly. And besides that, she’s always been a gym rat.”

Teresa’s background is more difficult to track. She was born in Artem, Russia, and was adopted by Bill and Michele Acock as an infant. She was six months old when the Acocks brought her home to Walla Walla.

“Teresa’s mother came from the province of Buryatia, which is right on top of Mongolia, and that’s where Teresa gets her Asian look,” Michele explained. “Her father was from Russia.”

Although Teresa’s athletic gene pool remains a mystery, the Acocks are not surprised by their daughter’s success on the basketball court.

“She just has ability,” Michele said. “Anything she touches, she picks up. When she was at Assumption, she would play football with the boys at recess, and she could outthrow most of them.”

As a freshman at WWCC, Cierra Jo was the Warriors’ leading scorer and top 3-point shooter. Teresa was relegated to a reserve role as McKeown’s backup at shooting guard, but that’s changed this season.

“Cierra Jo came in and played right away and lit it up right away,” Hazeltine said. “Mostly because of her size. She is long and can do a lot of things other girls can’t.

“Teresa had to get used to the speed of the game, and she is so little. But it was obvious that she can shoot and she stepped in and has some big moments for us.

“They both had good freshman years.”

With Jade Skidmore returning as the Warriors’ point guard and Cierra Jo entrenched at the shooting guard position, Hazeltine has inserted Teresa into her starting lineup at the off guard position in place of graduated Jacee Jensen, who started at that spot a year ago.

“There’s not a lot of difference between the two and the three,” Hazeltine said. “Cierra Jo is a true three because she can do a little more inside. But they are two true shooting guards.

“Cierra Jo will have a target on her back because of last year,” the coach added. “Everyone knows about Cierra Jo, but no one knows about Teresa. Those two are going to make it very difficult for teams to zone us because one of them is always going to be open.”

In their first three games of the season at last weekend’s Yakima Invitational, Cierra Jo scored 68 points and Teresa 66. Cierra Jo was 12-for-34 from 3-point distance and Teresa sank 12-of-33 from beyond the arc.

Cierra Jo has already signed a letter of intent to attend the University of California-Davis next year. She has no regrets about her decision to attend WWCC for two seasons before joining the four-year ranks.

“I could have gone to L-C State in Lewiston,” she said. “There was also a school in Hawaii and one in Alaska. My problem was I didn’t want to go too far away right out of high school.

“I chose WWCC to get my feet wet and it’s great, I love it.”

Because she is vertically challenged, Teresa’s way forward as a basketball player is less clear.

“If the opportunity comes up, I will play basketball,” she said. “If not, I will just get my degree and start from there.”

If grit and determination count for something, Teresa will no doubt find a place to play.

“One day when she was maybe 4 or 5 years old,” Michele Acock remembered, “my father was watching her take charge of whatever it was she was doing. And he said, ‘Her great, great, great, great grandfather Genghis Khan would be very proud of her.’”

Regardless of the paths these two 19-year-olds follow once they finish up at WWCC, it’s hard to imagine their friendship not enduring. Maybe they haven’t been best friends always, but it sure looks like they are best friends forever.