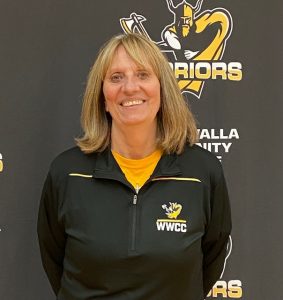 Bobbi Hazeltine enters her 24th year as Head Coach of the WWCC Warrior Women. She has won 496 games at the WWCC helm, and her teams have qualified for the NWAC Tournament 20 of her 23 years, with one year being a non-tourney year due to Covid.

Coach Hazeltine was inducted into the Idaho Athletic Hall of Fame in 2008.  She was honored because of her coaching success in the state of Idaho.  She served as the Head Volleyball and Girls’ Basketball Coach at Troy High School for 13 years, winning 246 volleyball matches and 253 basketball games.  She also won nine state championships in the two sports.

Coach Hazeltine was born and raised in Idaho, and she received her Bachelor’s Degree and Master’s Degree from the University of Idaho.

At WWCC, Hazeltine believes in a very disciplined program, centered around fundamentals.  She stresses excellence in the classroom, saying that, “Our players are students first, athletes second.”    Almost every player in Hazeltine’s program has graduated with an AA Degree, and most have gone on to four-year colleges or universities.  Hazeltine has placed many of her players in solid four-year basketball programs, with a handful of them playing at the Division 1 Level.

In the spring of 2015, Coach Hazeltine was selected to receive the Community Service Award from Walla Walla Community College.  This award is given to a college employee who serves his or her community in the way of volunteering and community projects.  Coach Hazeltine and her basketball teams have volunteered at school carnivals, local book fairs, food drives, Breast Cancer Awareness Fundraisers, Toys for Tots, Help Line, the Walla Walla Christian Aid Center and at Walla Walla Assisted Living.

In addition to coaching the Women’s Basketball Team, Coach Hazeltine serves as the Coordinator of First Year Experience.  She also teaches FYE Classes, is an advisor and is in charge of New Student Orientation at WWCC.

Coach Hazeltine and her husband Rory have two married children:  Allison – to Jason, and Nick – to Ellie.  They also have seven grandchildren: Kaden, Kaley, Connor, Kennedy, Camren, Luke and Grant, with one more grandchild expected in December. 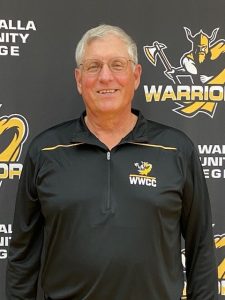 This will be Mark’s 20th year with the Warrior Basketball Program.  Over the last 19 years, the team has accomplished many of their goals, including winning an NWAC title in 2018.  He is looking forward to another successful season working with Coach Hazeltine.  Mark is the main film coordinator for the Warriors, and breaks down hours of film while analyzing offensive sets that the Warriors run.

Mark has been involved with coaching throughout the Walla Walla area for the last 30 years.  He spent eight years coaching at DeSales High School in the Lady Irish Basketball Program.

Mark has both his B.S. and M.S. in Civil Engineering from the University of Idaho.  He retired in 2013 from Walla Walla District Corps of Engineers. He and his wife Kathy have two children, Brian and Jenny. They are also the proud grandparents of Bronson, Linley, Blake and Brooks. 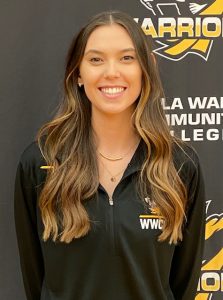 Teresa Acock joins the WWCC coaching staff as another first year coach who is a former WWCC Women’s Basketball player.  Teresa was raised in Walla Walla and played her high school ball at DeSales Catholic School.  She was a three-sport Varsity athlete all four years at DeSales, and she holds the record for the most 3 pointers scored at DHS.  Teresa scored over 1000 points in high school, and she led her team to a 6th place and 3rd place finish at the State Tournament.

After WWCC, Teresa earned a basketball scholarship to Division II Western Oregon University.  After playing there, she attended Wenatchee Valley College.  She is currently finishing her degree there, and she is working towards becoming an X-Ray Technologist.

Teresa will work with the Warrior shooting guards and hopes to help them develop the same shooting work ethic that led her to become one of WWCC’s most accurate shooters. 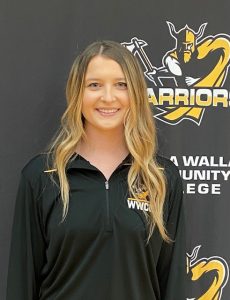 Cierra Jo McKeown joins the Warrior Staff as a first year coach who is a former WWCC Women’s Basketball player.  Cierra was raised in Touchet and played her high school ball there.  She was First Team All-Conference all four years at THS, and she scored a record 2356 points for the Indians during her career.

Cierra signed at WWCC, where she had a stellar career.  She helped lead the Warriors to the 2018 NWAC Championship, while being named NWAC Women’s Basketball Player of the Year and Blue Mountains Female Athlete of the Year.  She then received a full-ride scholarship to UC Davis, where she played for one year before transferring back to WWCC to get her Nursing Degree.

For the Warriors, Cierra will mainly work with the guards, and she is looking forward to passing on her love for the game and knowledge of the game to the current Warriors. 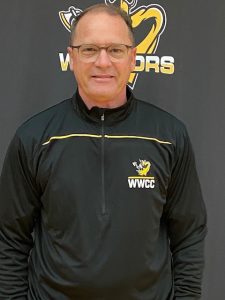 The Warriors welcome Tim McKeown to the coaching staff as a veteran high school coach with a wealth of knowledge.  Tim started his coaching career in 1984 as an Assistant Boys’ Basketball Coach and Head Sophomore Coach for Walla Walla High School. He coached under Hall of Fame Coach Jim Thacker for 9 years.  After leaving coaching for a bit, Tim came back to Wa-Hi in 1998 and helped the Blue Devils win the State Title.

Tim was named Head Girls’ Basketball Coach at Touchet in 2000, and they had many good years.  In the 2007-2008 season, they made it to the State Playoffs, where they finished third.

In 2009, Tim took over the Touchet Boys’ Basketball program, and he coached there until 2020.

Tim knows what it takes to be a WWCC Basketball player, as he played for the Warriors in 1980-81.  His role with the WWCC Women’s Team will be to work with the post players, to help break down film and to help with the overall emphasis on defense and rebounding.