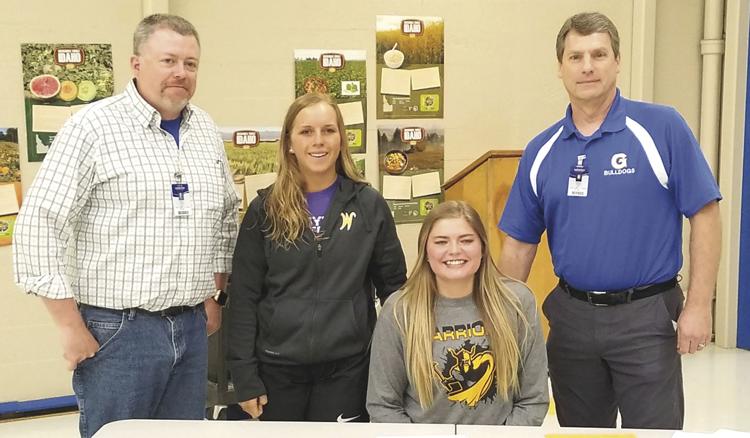 Genesee’s Kelsey Jensen listed three goals when she began her final season of high school basketball — and she went 2-for-3 on accomplishing those.

Jensen wanted to help her team beat Lapwai — and the Bulldogs did just that, defeating the Wildcats 61-46 in the Idaho Class 1A Division I semifinals.

Jensen also wanted to sign to play collegiately — which she made a reality this past week when she committed to the Walla Walla Community College women’s basketball team.

Accomplishing goal No. 2 will give Jensen more time to try for her third goal — to someday dunk.

“I can get the bottom of the rim, but I can’t get the ball up and over yet,” Jensen said. “But hopefully, playing college will help me get my jumping higher.”

One thing’s for sure: Nobody dunked on the 5-foot-11 Jensen this year.

Jensen, a forward, finished her final prep campaign with a Genesee single-season record 84 blocked shots — 11 of those coming at State, where the Bulldogs made a surprise run to the state title game before running out of magic and taking second.

For a while, Jensen worried that her team’s 10-point loss to Shoshone in the title game might mark the end of her competitive playing career — until Walla Walla Community College eventually reached out to her.

“I’m just thrilled and excited for her because I know it was something she really wanted to have happen,” Genesee coach Greg Hardie said of Jensen playing at the next level.

Jensen did some of her best work at the state tournament. She notched four blocks in her team’s semifinal upset of Lapwai while recording a double-double (13 points and 10 rebounds) and going 8-for-12 at the line.

“Besides beating Lapwai, (getting signed by a college) was huge,” Jensen said. “At first, I was heartbroken because I didn’t get a college offer right off the bat. It happened awhile after the season was over. That was kind of rough, but I got my goal eventually.”

In college, Jensen plans to major in athletic training and minor in secondary math. She’s the daughter of Renee Jensen-Hasfurther and Anthony Hasfurther.