NWAC Road to the Final Four – Who will make it to Sunday? 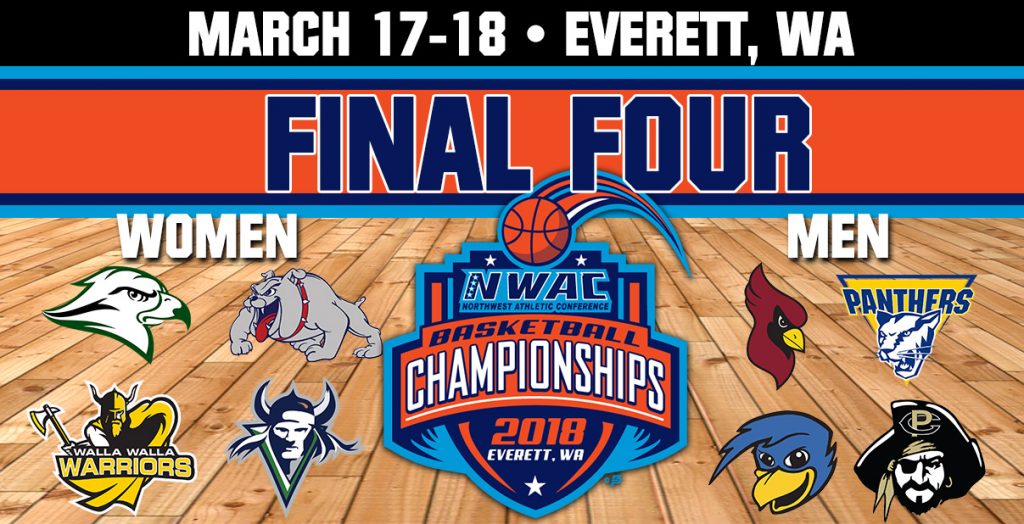 VANCOUVER — The Final Four is set for this weekend at the Walt Price Student Fitness Center at Everett Community College in Everett, WA.

Taylor Jensen led the way for the Roadrunners scoring 19 points while adding 8 boards, 2 blocks and 3 steals. LBCC shot a similar FG percentage of 38.5% while hitting 25% from the arc and 77.3% at the free throw line.

MEN: Portland Panthers vs. North Idaho Cardinals, 4pm
After slaying top-ranked Everett 112-110 in a double overtime thriller Sunday – the question is – do the Cardinals still have enough in the tank to take down 2nd-ranked Portland?… Six days rest should help.

The two squads have not met this season, but do have common opponents in Big Bend, Chemeketa, Yakima Valley and Spokane. Portland turned in a slightly better record going 5-2 against the common opponents while North Idaho registered a 4-3 record.

Portland punched their ticket to the Final Four with a late come-from-behind win over Bellevue 72-67 and a thumping of 4th-ranked Spokane 93-65. In addition to North Idaho’s epic battle with Everett, the Cardinals routed Lower Columbia in the Sweet Sixteen, 86-68.

Women: Umpqua Riverhawks vs. Bellevue Bulldogs, 6pm
In their only previous meeting of the season, the Riverhawks (30-1) defeated the Bulldogs (22-8) in a preseason tournament at Bellevue. UCC pulled out to a 21-12 lead before taking a 43-32 halftime lead into the locker room. After a tight 3rd quarter, BC outscored the Riverhawks 21-16 in the fourth period, but fell short, 87-79.

The Riverhawks used a balanced scoring attack with all five starters scoring in double figures led by sophomore Dajanay Powell with 24. The Bulldogs had four players in double-digit scoring led by sophomore Brenda Akoto’s 25.

Bellevue turned in a 48.3% FG percentage to UCC’s 45.7%. With most team statistical categories being equal, the game was decided on the backboard as Umpqua took down 40 rebounds to Bellevue’s 19. The twin towers of 6’3” Powell (10) and 6’4” Jordan Stotler (8) combined for 18 of UCC’s rebounds. Bellevue did take an advantage in steals with 7 to the Riverhawks 1.

Top-ranked Umpqua got to the Final Four with an 11-point win over N#4 seed Peninsula Pirates 83-62 before dismantling E#2 and 5th-ranked Columbia Basin Hawks 93-66 in a lopsided victory.

The Bulldogs will have their hands full as the Riverhawks lead the league in 11 team statistical categories and are in the top 6 in another 5 categories.

The question for Bellevue’s shorter squad… while they can certainly run with the Riverhawks, can Brenda Akoto and company keep Powell from dominating in the paint and scoring at will?

Powell scorched a smaller CBC team for 46 points on 91.3% shooting while tying a tournament record for points and smashing the FG made record with 21 in the game. The Bulldogs may have to extend their defense to pressure the Riverhawks in the full court.

The Warriors will not be looking past the Vikings though as the East Region was solid from top to bottom. Walla Walla arrived to the Final Four with impressive wins over the W#4 Highline Thunderbirds 78-37 and 3rd-ranked S#2 Lane Titans in a stunner 85-62.

The Vikings will need to find an answer for East Region MVP Cierra Jo McKeown who is averaging 22.6ppg (2nd in the league) and Jade Skidmore (15.5ppg/9.4rpg/4.9apg). The sophomore combo has lit up the Vikings in the previous two meetings.