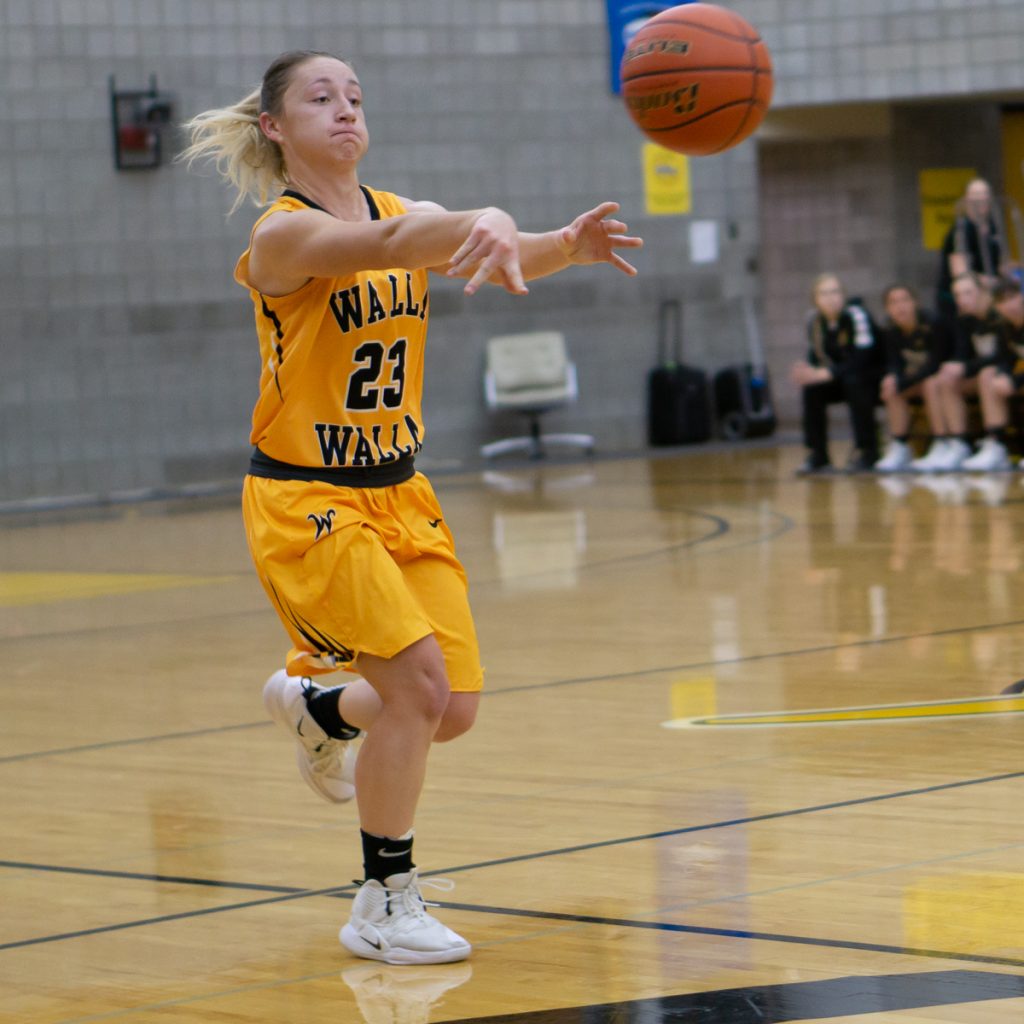 MOSES LAKE — Walla Walla women’s basketball coach Bobbi Hazeltine felt as dragged out as her players in the aftermath of Monday’s harrowing 83-81 overtime victory over Big Bend on the Vikings’ home floor.

“I know that I am exhausted,” the Warriors coach said. “And I know the girls are, too. But what a game.”

Big Bend came into the game on a 12-game winning streak and held a share of first place in the Northwest Athletic Conference’s East Region standings with Wenatchee, both teams at 5-0.

But early in the fourth quarter the Warriors found themselves up seven points and smelling upset.

“The officials were calling it really tight.” Hazeltine said. “And up seven points, I told the girls not to foul. So what do we do coming out of a time out, we immediately foul and they make two free throws.”

That cut Walla Walla’s lead to five and Hazeltine encouraged her players to play even more cautiously on the defensive end.

Nevertheless, the Warriors still led 67-63 on a driving layin by McKenzie Gunter with just 16 seconds on the fourth-quarter clock.

But another foul sent the Vikings’ Kelsey Sorenson to the line and she made the second of two free throws to cut WWCC’s lead to three points.

Freshman guard Sailor Liefke, who scored a career-high 35 points to lead the Warriors, was fouled with 7.9 seconds showing.

She sank both free throws for a 69-64 lead and it looked like WWCC would escape the Vikings’ furious comeback.

But Miranda Johnson, who led the Vikings with 30 points, drained an uncontested 3-pointer and Big Bend drew within just two points with two seconds on the clock

“She’s a great shooter,” Hazeltine said of Johnson. “We didn’t lose her, but we didn’t contest the shot, either, the way the game was being called.”

Then, after back-to-back Big Bend timeouts, the Warriors’ inbound pass was deflected. The Vikings’ Kayla Luke scooped the ball up off the floor and rolled it in at the buzzer to knot the score and send the game into overtime.

“It rolled around and hit every part of the rim and fell in,” Hazeltine said of the game-tying basket. “I thought we had won it. What a miracle comeback.

“Talk about deflating,” Hazeltine added. “I was personally deflated and told the girls in the huddle that this one was on me because we got so conservative. I asked them to bail me out and they did.”

The Warriors took the lead for good early in the overtime on a 3-point basket by Jessica Cheney and two free throws from Kaileigh Dietrich-Denton. Another Liefke trey, her seventh of the game in nine tries, made it 81-76 with 1:15 to play, and Gunter sank two free throws with 39 seconds showing to seal the victory.

At 4-2 in league play and 14-5 overall, WWCC moved into a share of third place in the East with North Idaho, which defeated Columbia Basin 83-66 Monday afternoon in Pasco.

“For our team, every game is a battle because of our inexperience,” Hazeltine said. “We lost to Columbia Basin in a non-league game in November and they are playing everybody tough. And Blue Mountain is playing people tough for awhile.

“But we have come so far this season and are playing so much better than I ever imagined we would,” the coach added. “I don’t know if we can keep it up, but last night was sure encouraging.”