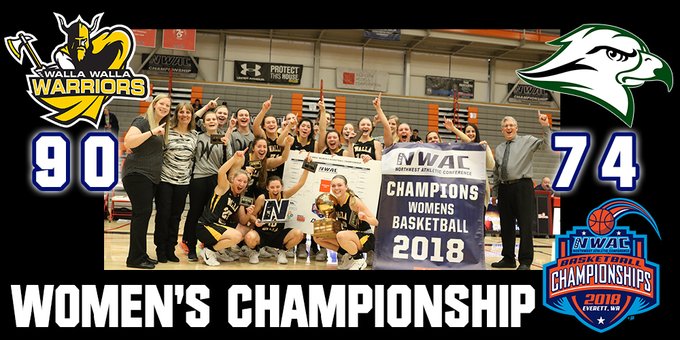 By Eric Trent for NWAC

First-seeded Walla Walla’s last loss came on Nov. 19 to Lady Elite. The East Region Warriors were runners-up in 2017, falling to Spokane in the title game.

Warriors coach Bobbi Hazeltine, in her 19th-year with the team, said it felt nice to gain some redemption after falling short a year ago.

“It was hard to lose last year,” Hazeltine said. “They had a goal and we reached it.”

Ciera Jo McKeown was named tournament MVP after pouring in a game-high 32 points. McKeown was scorching hot from long range, draining nine 3-pointers on 9-for-12 shooting from deep.

“It feels good,” McKeown said. “I’ve never won a championship before. I’ve gone close, but never. Last year coming to the championship and not winning, and then winning this year feels really good.”

“I’m glad I could make a positive impact,” Turner said. “It feels so awesome to win the championship. We worked so hard for it.”

Although it was a 16-point win, it did not come easy. From the get-go, it was a battle of size versus shooters.

Umpqua, the No. 1 seed in the South Region, had 6-foot-4 South Region MVP Jordan Stotler, and 6-foot-3 Dajanay Powell, who broke the tourney scoring record with her sixth point of the title game on a layup in the first quarter. Powell turned in 146 points in four games surpassing Mar’Shay Moore’s 123 point record set in 2015.

The Warriors had sharpshooting sophomore guard Ciera Jo McKeown, who broke the school scoring record by dropping 45 points in the semi-finals, along with sophomore guard Jade Skidmore, a South Region first-team selection.

The Warriors were able to counter the distinct size disadvantage on the glass by shooting 52.1 percent from the field and knocking down 10 3-pointers at a 43.5 percent clip.

Powell was a force inside, though, piling up 27 points on 13-for-20 shooting, getting all her points from within six-feet of the basket. The only other double-digit scorer for the Riverhawks was Stotler with 16.

“We had [Powell] doubled everywhere,” Hazeltine said. “We tried to force the middle. She got her points, but the other players really didn’t. Great defensive effort on our part.”

The Warriors countered Umpqua’s size by patrolling three defenders in the paint, double-teaming Powell and forcing the Riverhawks to beat them from the perimeter.

Every time Umpqua would attempt a comeback, Walla Walla would counter with a shot-clock, buzzer-beating shot, or a pull-up jumper in the face of two defenders. The Warriors simply knocked down shots when it counted.

“We had to stay persistent throughout the whole game,” Turner said. “We knew we could run hard, we just had to lock them down when we could.”

McKeown’s 3-pointer buried from the corner gave the Warriors its largest lead of the first half, a 44-35 cushion with 3:53 left before the break, part of a 9-0 run.

The Warriors went into the break holding a 46-39 lead on 50 percent shooting.

McKeown was on fire from long range in the first half, draining four 3-pointers to go with 17 points on 6-for-9 shooting overall and 4-for-6 from deep.

“We focused [defensively] on their posts,” McKeown said. “They were obviously really tall, so we focused on doubling down and taking away their shooters.”

The Riverhawks climbed back in within 13 at 67-54 on Stotler’s baseline jumper, but McKeown drilled back-to-back 3s to end the third quarter, the last one at the buzzer to give the Warriors a 73-54 lead going into the final quarter.

Teresa Acock’s layup from the left side gave the Warriors a 22-point lead, their largest of the game, with 5:28 remaining.

Hazeltine said a year of hard work has finally paid off.