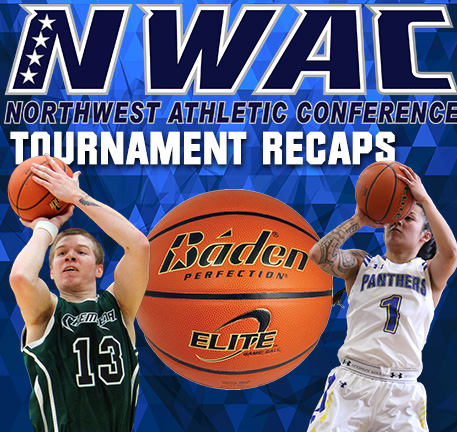 Dale J. Bates Invitational (Men)
EUGENE—Spokane and Umpqua put on a show for the fans with a double OT game that came down to the wire at the Dale J. Bates Invitational hosted by Lane. It was Spokane coming out on top 107-102 in a hard fought game. Tournament MVP Cesar Sandoval lead the way with 35 points and 9 rebounds while Isaiah Gotell chipped in 15 and 8 rebounds off the bench. Umpqua turned in impressive performances from Eric Klekas (30 points) and Ethan Betts who had 28 points and 6 rebounds. Umpqua was also helped by the 17 rebounds of Cody Gray. In the 3rd place game, SW Oregon topped Lower Columbia by a score of 98-90. Skylar Bradford scored 25 points to go along with 7 rebounds for SW Oregon.

Raider Holiday Classic (Women)
LAKEWOOD— For the annual Raider Holiday Classic, it was a chance for Walla Walla to show the competition that they are primed for another NWAC Championship run. However, they’d have to get through a pretty tough field including familiar tournament foes Bellevue, Clackamas, Peninsula and Wenatchee Valley. The Warriors used quality victories over Lane and Bellevue to meet the Clackamas Cougars in the championship game. Fresh off a hot start to the season, the Cougars were able to get by Columbia Basin and Wenatchee on their way to the final day. Walla Walla would prove steady and strong as they got ahead early and would stay ahead on their way to a 57-49 victory. Teresa Acock lead all scorers with 18 points while Adrianna Peralez netted 17. For Clackamas, Kayce Mock tallied a Double-Double with 12 points and 11 rebounds. In the third place game, Wenatchee defeated Bellevue 58-49. Zaria Jones-Frost lead Wenatchee with 24 points.

Everett Classic (Women)
EVERETT— It was a good weekend for the Everett Trojans at their very own Everett Classic. The Trojans were able to bring home the trophy as host team and the only host this weekend to do so. First they were able to get past Green River and Big Bend on the road to Sunday. In the final, they’d meet last year’s NWAC champ Spokane who was able to get past Lower Columbia and Skagit Valley. The Trojans would outscore Spokane in 3 of the 4 quarters for a 14 point victory. For Everett, Alexis Biggerstaff scored 29 points and grabbed 6 rebounds while Uju Chibuogwu scored 18. Jessica Olson netted 31 for Spokane to go with 11 rebounds. In the third place game, Big Bend defeated Skagit Valley 78-58. Sunnie Martinez lead Big Bend with 25 points and 7 assists.