WWCC Women hold on to advance to Championship 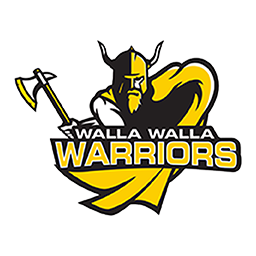 In game two of the NWAC WBB Final Four Tournament, the Walla Walla Community College Warriors held on after an incredible second half comeback by the Skagit Valley College Cardinals 67-63.

After a slow start to the game, the defensive intensity continued through the quarter as the Warriors took a 13-12 lead to close the first quarter.

Excellent offensive ball movement spurred by the outside shooting/play of Marquel Greene the Warriors pushed to their lead to 35-26 as the 2nd quarter closed.

First half scoring leaders for the Warriors were Greene off the bench with 8 points and Emily Hancock with 8 as well.

The Cardinal’s were paced by Emily Yost with 9 points and Deidra Miller with 8 points.  The Cardinals shot 40% for the half and shot 20% from the 3-point line.

Walla Walla continued their offensive execution starting the 3rd quarter with a 19-3 run.   SVC did not score until the 5:24 mark of the third period.

WWCC extended their lead to 26 late in the third quarter leading 57-31 and it looked like the Warriors were going to cruise the rest of the way.

The Warrior defense held SVC to 11 points in the quarter and 19% shooting.  SVC finished the quarter on a 6-0 spurred by a pressure defense that forced 3 turnovers.

The Cardinals continued their hot offensive output to start the 4th quarter by going on a 12-1 and cut the lead to 58-49 with 6:53.   SVC forcing WWCC into 9 turnovers and rolling those turnovers into timely baskets including three 3 point baskets in a 45 second stretch.

Adiya Jones-Smith of SVC fouled out at the 2:19 mark but Makayla Lancaster hit 3-point basket to bring the Cardinals within one at 62-61 with 1:23.

With less than 50 seconds the Cardinals took the lead on a running shot by Maddy Bryan.  An untimely foul by SVC put Cierra Jo McKeown on the line and she made both for a 64-63 lead.

The Warriors held on for a thrilling 67-63 finish.

The Warriors have made five previous appearances in the title game winning two. Their last appearance was in 2011 while their last title was in 2010.

Spokane has also made five championship appearances. CCS’s last appearance was 2008 and they won the second of two women’s championships 1984.