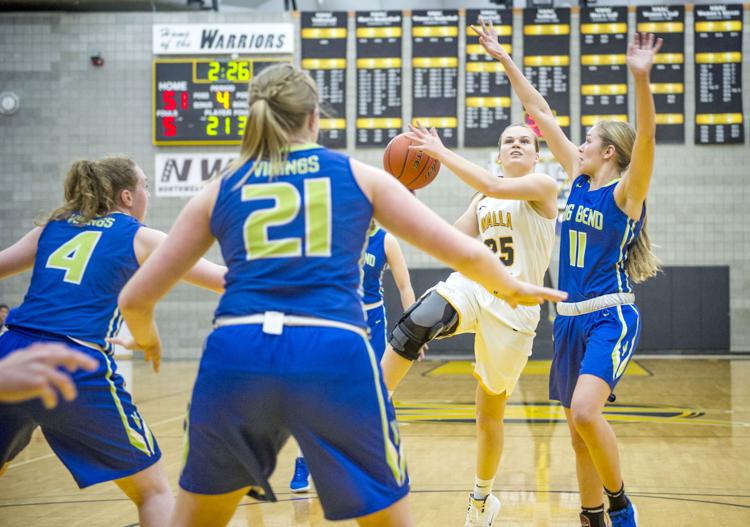 Walla Walla lost ground in each of the first three quarters Wednesday night in the Dietrich Dome and couldn’t quite make it all the way back in the fourth.

Visiting Big Bend held off the Warriors over the game’s final 10 minutes and claimed a 66-61 victory and the Northwest Athletic Conference’s East Region women’s basketball championship in the regular-season finale for both teams.

Wenatchee, which defeated Yakima 77-62 Wednesday night in Wenatchee, is alone in second place with a 12-3 record and has one game remaining Friday when it hosts Blue Mountain in makeup game.

But since the Knights lost twice to Big Bend during the regular season, the East Region title belongs to the Vikings by virtue of the head-to-head tiebreaker.

The Warriors, meanwhile, saw their East Region record slip to 10-6 and 19-7 overall.

But thanks to North Idaho’s 67-60 loss at Columbia Basin Wednesday and a favorable tiebreaker scenario, Walla Walla will advance to the first round of next week’s NWAC Championships in Everett as the No. 3 seed out of the East.

The Cardinals are also 10-6 in league play, 19-7 overall, but they’ll take the fourth seed to the tournament since they lost twice to first-place Big Bend and the Warriors and Vikings split their league matches.

“As poorly as we played, we were in the game at the end,” WWCC coach Bobbi Hazeltine said of Wednesday’s defeat. “We cut it to three with less than 20 seconds to play, but then we had to foul.”

WWCC’s Jessica Cheney sank her fourth 3-point basket of the game with three seconds on the clock to cut Big Bend’s lead to 64-61. But the Vikings’ Anna Yarbro connected twice from the free-throw line to seal the victory.

Cheney scored 22 points off the bench to lead the Warriors and starting point guard McKenzie Gunter was in double figures with 16 points.

“McKenzie and Jessica played really well, but that was about it for us offensively,” Hazeltine said.

The Warriors played the game without freshman guard Sailor Liefke, who was held out due to concussion protocol.

“Missing Sailor really hurt us,” Hazeltine said. “She scored 35 points the last time we played Big Bend and we struggled on offense without her.”