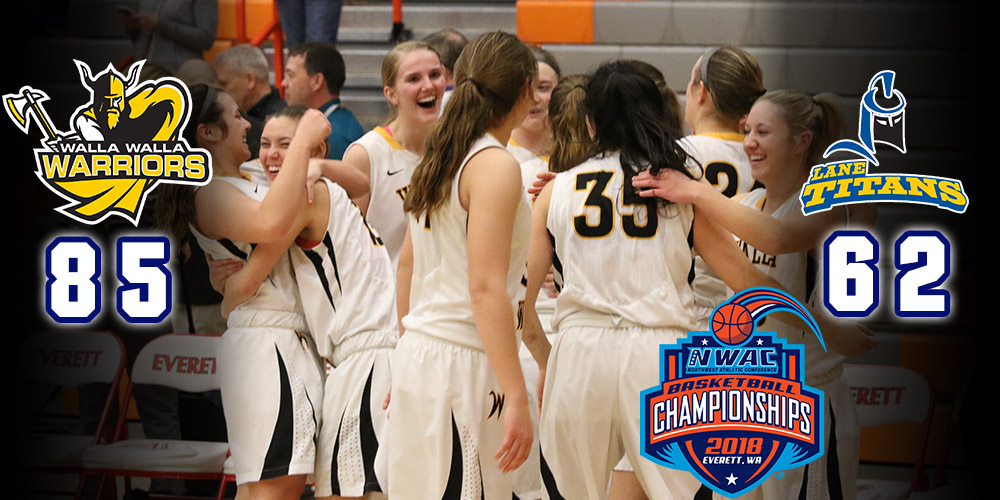 “It was a struggle, because they are really big and we are not at all,” WWCC coach Bobbi Hazeltine said. “They exploited the size advantage they had and went inside every single time.”

WWCC meets fellow East Region foe Big Bend at 8 p.m. next Saturday in Everett. The winner will face the winner of next Saturday’s Umpqua versus Bellevue battle in a 5:15 p.m. championship game next Sunday.

Umpqua and WWCC are 1-2 in the NWAC coach’s poll.

Up 38-33 at halftime of Saturday’s Elite Eight matchup, WWCC switched from a straight man-to-man defense in the post and started sending its guards to double-team the Titans’ inside threats.

“We just told ‘em you’ve got to beat us from the outside,” Hazeltine said, “and they couldn’t.”

The Warriors are more than adept from the outside. Cierra Jo McKeown scored a game-high 28 points, with she and teammate Teresa Acock (20 points) hitting a half-dozen three-pointers each. Jade Skidmore notched a triple-double for WWCC with 18 points, 10 rebounds and 10 assists.

Adrianna Peralez, who had 17 rebounds in WWCC’s 78-37 tourney opening win over Highline on Thursday, nabbed a game-high 11 boards in Saturday’s victory. The Warriors outrebounded the taller Titans, 36-27.

The Warriors forced 18 Lane turnovers while committing nine themselves.

“We caused a lot of turnovers in the second half,” Hazeltine said. “They (the Titans) got really tired.” WWCC ran a four-guard rotation most of the night, with McKeown, Acock, Skidmore and reserve Kortney Hutchison doing the majority of the Warriors’ backcourt work.

“With those four guards we rotated and just ran and ran and ran,” Hazeltine said.